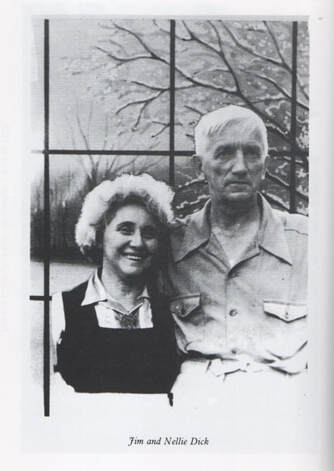 She was born Naomi Ploschansky in Kiev, Russia, on May 15, 1893, and moved to London at the age of nine months. Her father, Solomon Ploschansky, worked as a baker's helper. Her mother, Hanna Kiselevsky, was from Lipovets, near Kiev. Her maternal grandparents owned a small flour mill. Nellie Dick's involvement in the movement for libertarian education goes back to 1912, when, still in her teens, she started a Modern School in the Whitechapel district of London. Her soon-to-be husband, James Dick, had himself opened a Modem School in Liverpool in 1908, having met the Spanish educator Francisco Ferrer the previous year. After coming to the United States in 1917, Nellie and Jim played a major role in several educational experiments in the country, including the Modern Schools of Stelton, Mohegan, and Lakewood, which they darted in 1933.

James Dick died in 1965. In 1973 Nellie sold her Miami house, moved into an apartment, and threw herself into senior citizens' affairs. Every year, meanwhile, she went north to visit her son, James Dick, Jr., a Long Island pediatrician, who had attended the Stelton School as a child. She also took part in the annual reunions of the friends and alumni of the Modern Schools, at which she invariably spoke. In 1990, in her ninety-eighth year, Nellie left Miami and moved in with Little Jim and his family, where she celebrated her hundredth birthday in 1993. She died in 1995.