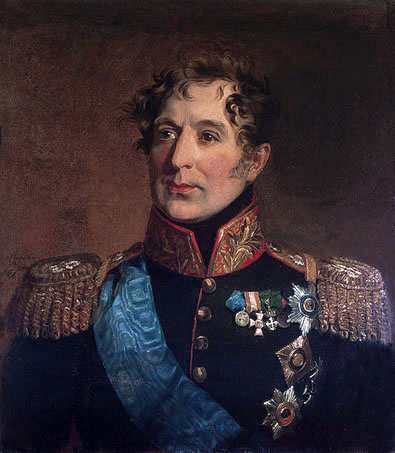 Count Mikhail Andreyevich Miloradovich, spelled Miloradovitch in contemporary English sources (October 12 [O.S. October 1] 1771 – December 27 [O.S. December 15] 1825[1]) was a Russian general of Serbian origin, prominent during the Napoleonic Wars. He entered military service on the eve of the Russo-Swedish War of 1788–1790 and his career advanced rapidly during the reign of Paul I. He served under Alexander Suvorov during Italian and Swiss campaigns of 1799.

When news of the death of Alexander I reached Saint Petersburg, Miloradovich prevented the heir, future tsar Nicholas I, from acceding to the throne. From December 9 [O.S. November 27] to December 25 [O.S. December 13] 1825, Miloradovich exercised de facto dictatorial authority, but he ultimately recognised Nicholas as his sovereign after the Romanovs sorted out the succession crisis. Miloradovich had sufficient evidence of the mounting Decembrist revolt, but did not take any action until the rebels took over the Senate Square on December 26 [O.S. December 14] 1825. He rode into the rows of rebel troops and tried to talk them into obedience, but was fatally shot by Pyotr Kakhovsky and stabbed by Yevgeny Obolensky.

Vladimir Bryukhanov suggested that Miloradovich was homosexual,[93] disregarding or dismissing evidence to the contrary, such as the memoirs of Nadezhda Durova. (Durova, disguised as a young man, was aide to Miloradovich in 1810 and later wrote about his affairs with women and their influence on the general's demeanor and on his relationships with subordinate officers.)[94] The standard version of events holds that his last passion was ballerina Yekaterina Teleshova, who earlier had an affair with Alexander Griboyedov, a diplomat "too short of money to be a long-term rival to the general"[95] (In 1825, Griboyedov wrote "... Miloradovich, that boastful idiot whom Shakhovskoy grovels to and idolises. They are both cattle."[95]).