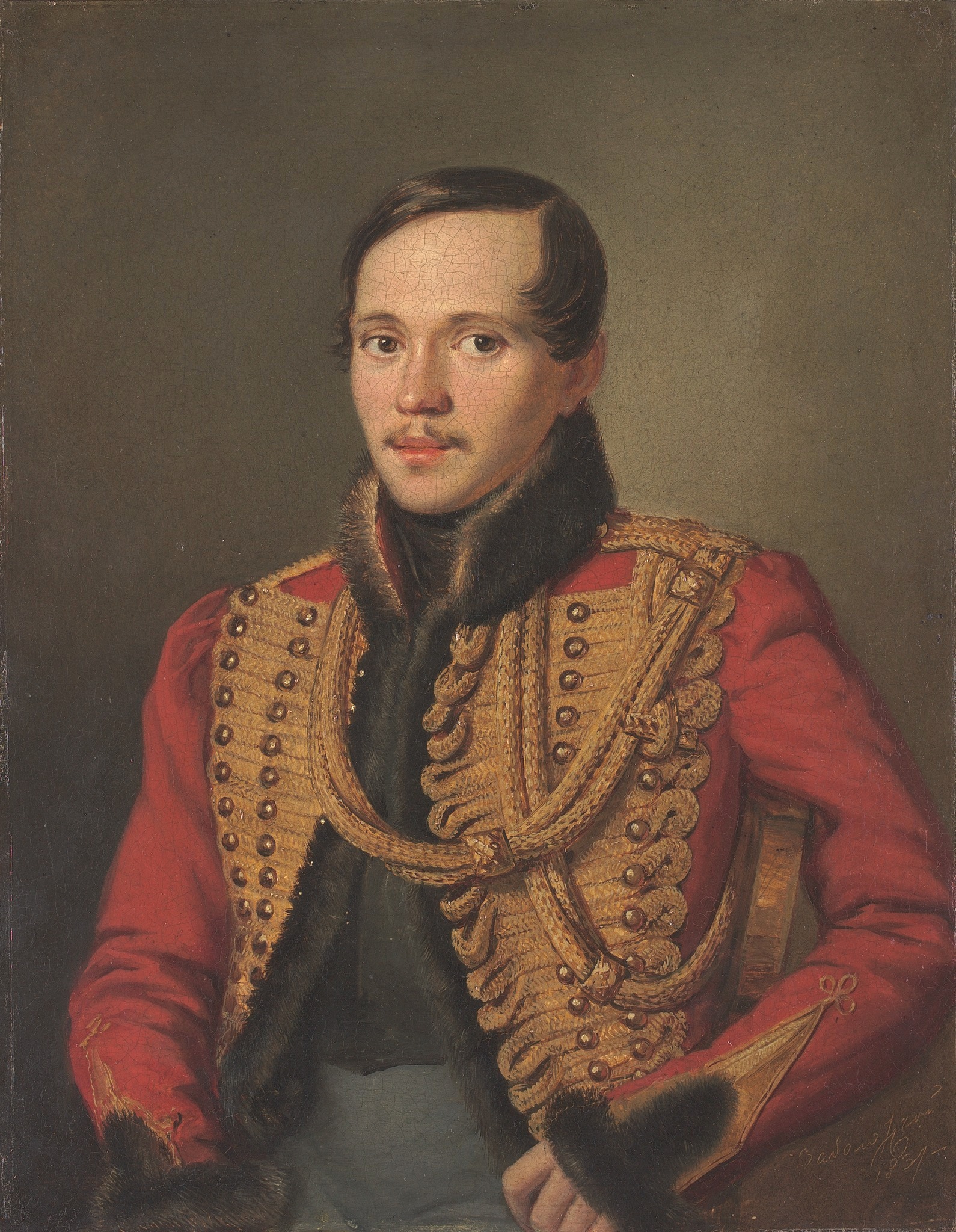 Mikhail Yuryevich Lermontov (October 15 [O.S. October 3] 1814 – July 27 [O.S. July 15] 1841) was a Russian Romantic writer, poet and painter, sometimes called "the poet of the Caucasus", the most important Russian poet after Alexander Pushkin's death in 1837 and the greatest figure in Russian Romanticism. His influence on later Russian literature is still felt in modern times, not only through his poetry, but also through his prose, which founded the tradition of the Russian psychological novel.

Lermontov had some familiarity with gay sex. In two bawdy poems written when he was 20, he describes the sexual antics of his fellow classmates in the Cavalry Cadet School. In a notorious poem called “Ode to the Lavatory,” the scene of nightly encounters between fellow military cadets: “[H]ere the shirt is lifted, revealing a silky bum and thighs ... ‘Hold me! I am melting! I’m on fire!’”

Mikhail Lermontov was a romantic who seemed to be continuously struggling with strong passions. Not much is known about his private life, though in verses dedicated to loved ones his emotional strife seems to have been exaggerated, while rumours concerning his real life adventures were unreliable and occasionally misguiding.[5] The Casanova complex—a hectic and indiscriminate pursuit of women who are not truly desired—is sometimes suspected of being a masking symptom of the repressed homosexual.

Lermontov fell in love for the first time in 1825, while at the Caucasus, a girl of nine being the object of his desires. Five years later he wrote about it with great seriousness, seeing this early awakening of romantic feelings as a sign of his own exclusiveness. "So early in life, at ten! Oh, this mystery, this Paradise Lost, it will be tormenting my mind till the very grave. Sometimes I feel funny about it and am ready to laugh at this first love of mine, but more often I'd rather cry," the 15-year-old wrote in a diary. "Some people, like Byron, think early love is akin to the soul prone to fine arts, but I suppose this is the sign of soul that's got much music in it," added the young man for whom the English poet was an idol.[31]

At sixteen Lermontov fell in love with Yekaterina Sushkova (1812–1868), a friend of his cousin Sasha Vereshchagina, whom he often visited in Srednikovo village.

Several 1830–31 poems by Lermontov were dedicated to Sushkova, among them "Nishchy" (The Beggar Man) and "Blagodaryu!, Zovi nadezhdu snovidenyem" (Thank you! To call the hope a dream...).

In 1830 Lermontov met Natalya Ivanova (1813–1875), daughter of a Moscow playwright Fyodor Ivanov and had an affair with her, but little is known about it or why has it come to an end. Judging by thirty or so poems addressed to "N.F.I", the latter has finally chosen a man who was older and richer, much to the distress of a young man who took this as a 'betrayal'.[7]

While in the University 16-year-old Lermontov passionately fell in love with another cousin of his, Varvara Lopukhina (also sixteen at the time). The passion was said to be reciprocal but, pressed by her family, Varvara went on to marry Nikolai Bakhmetyev a wealthy 37-year-old aristocrat. Lermontov was astounded and heartbroken.[5]

Having graduated the Saint Petersburg cadet school, Lermontov embarked upon the easy-going lifestyle of a reckless young hussar, as he imagined it should be. "Mikhail, having found himself the very soul of the high society, liked to entertain himself by driving young women mad, feigning love for several days, just in order to upset matches," his friend and flatmate Alexey Stolypin wrote.[16]

In December 1834 Lermontov met his old sweetheart Yekaterina Sushkova at a ball in Saint Petersburg and decided to have a revenge: first he seduced, then, after a while dropped her, making the story public. Relating the incident in a letter to cousin Sasha Vereshchagina, he blatantly boasted about his newly found reputation of a 'Don Juan' which he's been apparently craving for. "I happened to hear several of Lermontov's victims complaining about his treacherous ways and couldn't restrict myself from openly laughing at the comic finales he used to invent for his vile Casanova feats," obviously sympathetic Yevdokiya Rostopchina recalled.

By 1840 Lermontov had sickened of his own reputation of a womanizer and a cruel heartbreaker, hunting for victims at balls and parties and leaving them behind devastated. Some of the stories were myth, like the one concerning the French author Adèle Hommaire de Hell; well-publicised at the time (and related at some length by Skabichevsky) it was proved later to have never happened.

LLermontov's love for Lopukhina (Bakhmetyeva) proved to be the only deep and lasting feeling of his life. His unfinished drama Princess Ligovskaya was inspired by it, as well as two characters in A Hero of Our Time, Princess Mary and Vera.[7] In his 1982 biography John Garrard wrote: "The symbolic relationship between love and suffering is of course a favorite Romantic paradox, but for Lermontov it was much more than a literary device. He was unlucky in love and believed he always would be: fate had ordained it."[20]

AAfter visiting Moscow (where he produced no fewer than eight poetic pieces of invective aimed at Benkendorff), on May 9, 1841, Lermontov arrived to Stavropol, introduced himself to general Grabbe and asked for permission to stay in the town. Then, on a whim, he changed his course, found himself in Pyatigorsk and sent his seniors a letter informing them of his having fallen ill. The regiment's special commission recommended him treatment at Mineralnye Vody. What he did instead was embark upon the several weeks' spree. "In the mornings he was writing, but the more he worked, the more need he felt to unwind in the evenings," Skabichevsky wrote. "I feel I'm left with very little of my life," the poet confessed to his friend A. Merinsky on July 8, a week before his death.[7]

In Pyatigorsk Lermontov enjoyed himself, feeding on his notoriety of a social misfit, his fame of a poet second only to Pushkin and his success with A Hero of Our Time.. Meanwhile, in the same salons his Cadet school friend Nikolai Martynov, dressed as a native Circassian, wore a long sword, affected the manners of a romantic hero not unlike Lermontov's Grushnitsky character. Lermontov teased Martynov mercilessly until the latter couldn't stand it anymore. On July 25, 1841, Martynov challenged his offender to a duel.[20] The fight took place two days later at the foot of Mashuk mountain. Lermontov allegedly made it known that he was going to shoot into the air. Martynov was the first to shoot and he aimed straight into the heart, killing his opponent on the spot.[7] On July 30 Lermontov was buried, without military honours, thousands of people attending the ceremony.

In January 1842 the Tsar issued an order allowing the coffin to be transported to Tarkhany, where Lermontov was laid to rest at the family cemetery. Upon receiving the news his grandmother Elizaveta Arsenyeva suffered a minor stroke. She died in 1845. Many of Lermontov's verses were discovered posthumously in his notebooks.[30]