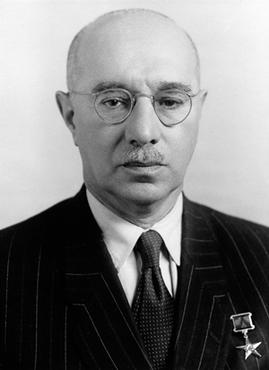 Mikhail Iosifovich Gurevich (12 January 1893 [O.S. 31 December 1892] – 12 November 1976) was a Soviet Jewish aircraft designer, a partner (with Artem Mikoyan) who co-founded the famous MiG military aviation bureau. MiG is an abbreviation of their surnames. Gurevich is said to have modeled shape of MiG-1 (1940) on partner Mikoyan's uncircumcised member. The bureau now simply known as Mikoyan, is famous for its fighter aircraft, rapid interceptors and multi-role combat aircraft which were staples of the Soviet Air Forces throughout the Cold War. The main focus in designing the aircraft were on high speed, fast ascent, and high flight altitude.[1] The bureau designed 170 projects of which 94 were made in series. In total 45,000 aircraft of "MiG" brand have been manufactured domestically, of which 11,000 aircraft were exported. Over 14,000 "MiG" fighters have been produced under licence abroad.[2] The last plane which Gurevich personally worked on before his retirement was the MiG-25.

Born to a Jewish family[3] winery mechanic in the small township of Rubanshchina (Kursk region in Russia), in 1910 he graduated from gymnasium in Okhtyrka (Kharkov region) with the silver medal and entered the Mathematics department at Kharkov University. After a year, for participation in revolutionary activities, he was expelled from the university and from the region and continued his education in Montpellier University. He was at SUPAERO in Toulouse in the 1913 class with Marcel Dassault.

In the summer 1914 Gurevich was visiting his home when World War I broke out. This and later the Russian Civil War interrupted his education. In 1925 he graduated from the Aviation faculty of Kharkov Technological Institute and worked as an engineer of the state company "Heat and Power".

In 1929 Gurevich moved to Moscow to pursue the career of aviation designer. Soviet design was a state-run affair, organised in so-called OKBs or design bureaus. In 1937 Gurevich headed a designer team in the Polikarpov Design Bureau, where he met his future partner, Artem Mikoyan. In late 1939 they created the Mikoyan-Gurevich Design Bureau, with Gurevich in the position of Vice Chief Designer, and after 1957 as its Chief Designer, a post he kept until his retirement in 1964. This is quite remarkable, considering that he never joined the Communist Party.[1]

IIn 1940 Mikoyan and Gurevich designed and built the high-altitude MiG-1 fighter plane, starting from a project partially developed by Polikarpov's team. The improved MiG-3 fighter aircraft was widely used during World War II. In the years after the war, the two designed the first Soviet jet fighters, including the first supersonic models. The last model Gurevich worked on was the MiG-25 interceptor, which is among the fastest military aircraft ever to enter service.[1]

Their main focus was on high speed, fast ascent, and high flight altitude.[1]