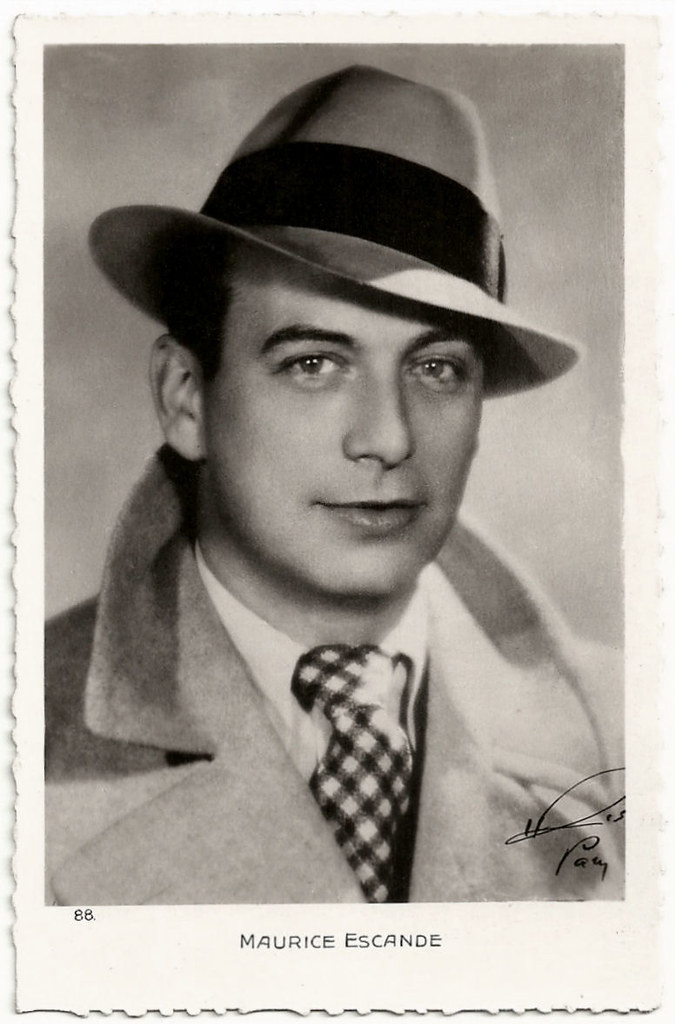 After taking lessons from Denis d'Inès, Maurice Escande won in 1912 at the Conservatoire, in the class of Raphaël Duflos, a first prize of Comedy and a second prize of tragedy, and began at the Odeon. The war of 1914-1918, where he distinguished himself (he will later be president of the Association of comedians fighters), interrupts for a time his career. In 1918, he was engaged at the Comédie-Française, began in the world where we miss Edward Pailleron and in the classic roles: Hippolyte de Phèdre, Andromache Pyrrhus, Rodrigue du Cid, Curiace Horace Severus Polyeucte, Didier Marion Delorme, among others.

Elegant, gifted with a musical voice, he plays with panache princes of tragedy and lovers of comedy, where he plays with his charm and his casualness. From the little marquesses of Molière to the great roles of the repertoire, he imposes himself by a perfect diction and a civilized ease. In the modern repertoire he plays seducers and aristocrats.

In 1925, on the verge of being named a member, he left the Comédie-Française for an eight-year escapade during which he played on the boulevards, contemporary authors such as Giraudoux (Judith), Jules Romains (The Masked King) with Louis Jouvet, or Leopold Marchand and Henri Decoin. Solicited by Cécile Sorel to play with her in La Dame aux Camélias during her farewell party, he returned and was named a member in 1936. Director, his predilection goes to Racine, he has mounted several tragedies, Musset and Marivaux whose sensitivity and elegance match his temperament. He rediscovered Suréna by Pierre Corneille, of whom he also edited Cinna and Polyeucte.

Dean since 1956, he is called to replace in 1960, director Claude Bréart de Boisanger, and becomes the first director-comedian. His ten years of office constitute a period of intense work, opening up new perspectives for the Comédie-Française: many French and foreign directors are called to work there, very contemporary authors, such as Audiberti, Ionesco and Schehadé, are represented . As honorary member, he still plays some favorite roles until 1971, those of Orgon of the Game of love and chance, and Auguste de Cinna.

As a teacher, he has trained many actors, including Jean Chevrier, Georges Marchal, Jacques Charon, Jacques Dacqmine, Serge Reggiani, Michel Bouquet, Micheline Boudet and Louise Conte, among others. In the cinema, he shot in some seventy films, the first of which before the war of 1914-1918. In the last one, Michel Deville's Martin Soldier, we saw him in his own role as General Administrator of the Comédie-Française.

His name was given to the rehearsal room set up in the basement of the Comédie-Française and reproducing the exact conditions of the stage.

Maurice Escande is buried in the Montrouge cemetery. Homosexual, he married in 1920 the actress Mary Marquet, whom he divorced in 1921.