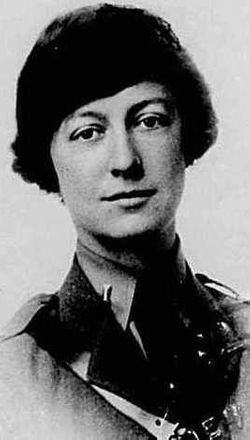 Born in New Haven, CT, to Vermont Episcopal minister Schureman Halsted Watkins (who was the chaplain for the Tombs prison and the prison on Blackwell’s Island at one time) and Helen Randolph Smith, Cushing studied at the Art Students League in New York City. She met Wagnerian opera star Olive Fremstad in 1911. Her memoir The Rainbow Bridge (1954) recounts her time as Fremstad’s personal secretary (1911-1918), including their friendship with Willa Cather. Watkins regarded the experience as “a better education than I might have found in college and a privilege far greater than I could possibly have deserved”. Fremstad was the model for Thea Kronborg, the heroine of Willa Cather's novel The Song of the Lark.[4] Their relationship was fictionalized in the novel Of Lena Geyer, by Marcia Davenport.

During WWI, Cushing served in the women’s motor corps in France. Sometimes referred to by Fremstad as “little Miss Watkins” (she was 5 foot 3), she served as a driver for the Motor Corps of the National League for Women’s Service before taking up the same role with Anne Morgan’s American Fund for French Wounded. She sailed for France in April 1918, with an item in the 18 April 1918 Barre [VT] Daily Times listing her prospective duties as driving “motor trucks carrying supplies, clothing, and building materials to the devastated villages”.

Cushing worked as a dance critic and editor for the New York Herald Tribune and became a freelance magazine writer in 1934. Watkins also wrote First Aid to the Opera-Goer (1924) and Behind the Scenes at the Opera (1925). She contributed articles and short stories to publications such as the New Yorker, the Saturday Evening Post, and Vogue; her short story “Stolen Thunder” (1930) was the basis for the Jeanette MacDonald-Nelson Eddy film Oh, for a Man (1930).