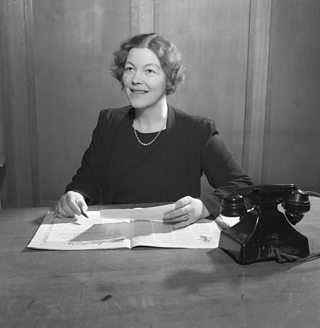 She was the first Director of Schools Broadcasting at the BBC. She pioneered their school broadcasting program in the 1930s and 1940s, and later served as controller of the BBC Talks division.

Mary Somerville was born in New Zealand on 1 November 1897, to the Reverend James Alexander Somerville and Agnes Fleming.[1][2] She was raised in Scotland, and attended Somerville College, where she completed an English degree.[2] While at school, she met and impressed John Reith; already convinced of the potential for radio in education, she offered to work unpaid for the BBC. Reith advised her to stay at Oxford and "take a degree" before joining the BBC. On Reith's recommendation, she was hired in 1925, and began working for the BBC's Education Department under J. C. Stobart.[3][4]

In 1929, Somerville was named Director of School Broadcasting, a position which she held until 1947. She believed firmly in the value of radio programming to enrich children's educational experiences, which she considered overly rigid at the time; under her tenure, school radio programs began to use dramatizations and sound effects to enliven their lessons.[5][1][6] Somerville worked hard to ensure that BBC school broadcasting was held to high academic standards and was seen as a legitimate enterprise, fighting against skeptics who considered radio to be good for entertainment only.[6] In 1947, Somerville was appointed assistant controller to the Talks division. On 1 July 1950, she became controller of the division, a position she held until her retirement from the BBC in December 1955.[7][1] She was the first woman controller of a BBC division.[3]

Somerville was married to journalist Ralph Penton Brown, with whom she had one son, from 3 July 1928 to 1945, when the marriage was dissolved. On 20 July 1962, she married Eric Rowan Davies, a BBC producer.[1] She died at her home in Bath on 1 September 1963.[1] She was diabetic, and "used to alarm [BBC producer Leonie] Cohn by casually yanking up her skirts during Talks meetings and injecting herself with insulin."[8] In 1935, she was appointed OBE in recognition of her efforts. [1]