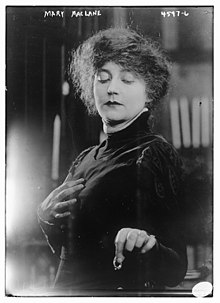 Mary MacLane (May 1, 1881 – c. August 6, 1929) was a controversial Canadian-born American writer whose frank memoirs helped usher in the confessional style of autobiographical writing.[1] MacLane was known as the "Wild Woman of Butte".[2]

MacLane was a very popular author for her time,[3] scandalizing the populace with her shocking bestselling first memoir and to a lesser extent her two following books. She was considered wild and uncontrolled, a reputation she nurtured, and was openly bisexual as well as a vocal feminist. In her writings, she compared herself to another frank young memoirist, Marie Bashkirtseff, who died a few years after MacLane was born,[4] and H. L. Mencken called her "the Butte Bashkirtseff."[2]

MacLane was born in Winnipeg, Manitoba, Canada in 1881,[4] but her family moved to the Red River area of Minnesota, settling in Fergus Falls, which her father helped develop. After his death in 1889, her mother remarried a family friend and lawyer, H. Gysbert Klenze. Soon after, the family moved to Montana, first settling in Great Falls and finally in Butte, where Klenze drained the family funds pursuing mining and other ventures. MacLane spent the remainder of her life in the United States. She began writing for her school paper in 1898.[5]

MacLane had always chafed, or felt, "anxiety of place,"[2] at living in Butte, which was a mining city far from cultural centers, and used the money from her first book's sales to travel to Chicago, then Massachusetts. She lived in Rockland, Massachusetts, wintering in St. Augustine, Florida, from 1903–1908, then in Greenwich Village from 1908–1909, where she continued writing and, by her own account, living a decadent and Bohemian existence.[8] She was close friends with the feminist writer Inez Haynes Irwin, who is mentioned in MacLane's private correspondence and is referenced in some of MacLane's 1910 writing in a Butte newspaper.

For a period she lived with her friend Caroline M. Branson, who had been the long-time companion of Maria Louise Pool until the death of the latter in 1898. They lived in the Rockland's house that Pool left to Branson. But the great love of MacLane's life was Harriet Monroe. In a poem dated 1902, MacLane writes:

The Story of Mary MacLane, by Herself, published in 1902, contains the story of her love for her English teacher, Fanny Corbin. By the time MacLane wrote her book, Corbin had already left Butte for Boston, and she was desperately missed. 15 years later, in I, Mary MacLane: A Diary of Human Days, MacLane repudiates her passion for Corbin, calling it "twisted."

MacLane died in Chicago in early August 1929, aged 48. She was soon forgotten and her prose remained out of print until late 1993, when The Story of Mary MacLane and some of her newspaper feature work was republished in Tender Darkness: A Mary MacLane Anthology.