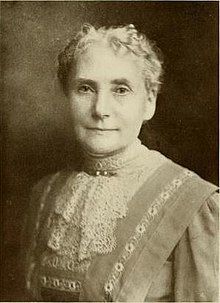 Dr. Mary Dodds (1843 - January 3, 1928) was brought up on a farm in Scotland. Her father died in early life, leaving her mother with six children. The Dodds' farm was in the borderland, near the Cheviot hills, in the County of Roxburgh. Mary' Dodds attended a normal school for women in a viillage two miles from their home in Yelholm.

When eighteen years old she moved to the United States with a younger brother. Three brothers had preceded her, establishing themselves in business in Ohio. The joungest brother, William, whom she brought with her, remained in Xenia, Ohio, and became the Mayor of that city. The oldest brother, Andrew, was the husband of Dr. Susanna Dodds, who was Susanna Way, born in Randolph County, Indiana, November 10, 1830, whose ancestors were Quakers on both sides. Her father was descended from Henry Way, the Puritan, who moved to America in 1620.

The people were not accustomed to "women doctors." Previous to their moving to St. Louis, there had been only two others established in the city — Dr. Grennan, and Dr. Lavelle — one a homeopath and the other an allopath.

Before she was eighteen years old Susanna Way taught school, follow ing this profession at intervals for ten y'ears, part of which time she was attending college. Andrew Dodds was a vegetarian, also a hygienist and strenuously opposed the use of drugs for the treatment of disease. His wife soon came to believe as he did, and they both decided to take up the study of hygienic medication in the Hygeo-Therapeutic College of New York. Before this they had both been studying in Antioch College, Ohio, entering in the fall of 1858. She took the full course and graduated in 1866. It was while attending this college they were married.

During the Civil War Mr. Dodds was injured in such a manner that his wife knew his life would be short, and in order to prepare herself for such an emergency took up the study of medicine. They moved to St. Louis in 1868 and Mr. Dodds and his brother formed the firm of A. & G. Dodds Granite and Stone Company.

After Mr. Dodds' death his wife conducted the business for two years until the affairs of the company were settled. Then she, with Dr. Mary Dodds, who had also taken a course at the college in New York on the advice of Dr. Susanna, opened their sanitarium in 1878 at 2826 Washington avenue, known as Dodds' Hygiean Home. They did not do surgery except in minor cases.

During the summer when business was dull, Dr. Mary would go to Chicago to attend clinics, because the advantages were greater there and a much more liberal view was taken of women following the profession of medicine.

In their practice they used only hygienic or natural methods of treatment; diet, exercise, massage, electricity and hydrotherapy in all its man ifold applications, and had phenomenal success in the curing of both acute and chronic patients. Except in cases for relieving pain, as in the last stages of cancer or other incurable diseases, no drugs were ever used. Though diseases of women and digestive disorders were their specialties, they treated all other diseases as well. They lived in the house they built at 2826 Washington avenue until 1900, when they erected an handsome structure at 4518 Washington boulevard.

The last twenty years of her life Dr. Susanna turned her attention entirely to writing. Her first work was "Health in the Household, or Hygienic Cookery;" the next, "Race Culture," which is was a comprehensive and practical book for women. The manuscript of other books was left in form for publication.

Dr. Dodds was very strenuous in her advocacy of the principles laid down by Drs. Trail, Graham and other pioneers in hydropathy and hygienic living. She wrote, "We need books, journals, papers, hygienic restaurants — which are only recently being inspected in the proper manner by the public — and many other influences with which to spread these doctrines."

In 1887 the friends of hygiene called a meeting in St. Louis to con sider the founding of a hygiene college. The result of this was a certificate of incorporation dated August 5, 1887, by the State of Missouri. The college was known as the St. Louis Hygienic College of Physicians and Surgeons, and Dr. Susanna Dodds was its dean. It graduated several classes and after a few years was discontinued for lack of funds, but the principles and methods taught there became more popular with the people, and were taken up more and more by the regular medical schools, and practiced by physicians.

Dr. Susanna W. Dodds died at Long Beach, Cal., January 20, 1911. Dr. Mary Dodds, until 1912, kept up the sanitarium work right along, at the same time attending to a large office and outside practice. She lived on the same simple diet which she served to her patients, believing that what would cure a sick person would keep a well one in good health. This she verified by a phenomenal measure of good health all through many years of strenuous work. Attention to diet was, in her opinion and experience, the thing most necessary for the preservation of good health. Wrong eating and drinking prepared the soil for disease. The beginning of disease was nearly always in the stomach. A patient who had once suffered from a bad form of indigestion should always be careful, for nature always keeps an eye on the crack ready to. give one a jar. She contended that more fruit should be eaten and less meat. Too much variety at the same meal was bad; two or three kinds of food at one meal was enough. The game of improper living was not worth the candle, for it led to suffering. Dr. Mary sold her sanitarium in 1912, and enjoyed the rest of his life in her quiet home, where she had an office and did a limited private practice.

In recounting incidents of her early life Dr. Mary placidly smiled over the impressions she first gained when coming to America. It was in December she came with her youngest brother — the last of the family to leave the old homestead in the far-off Cheviot hills of Scotland; and on arriving in New York she remembered vividly the desolate picture that was presented to her eyes. It was bitterly cold, with snow everywhere — the earth seemed covered with a mantle of dreariness. Coming from New York to Dayton, she saw nothing but snow and ice. She thought she had never seen such shabby, miserable homes as the frame houses which were clustered around the different stations — wondering how the inmates could ever keep warm. In Scotland every home was built substantially of stone and brick, and had been homes for generations, having been built with such a purpose. But she soon became accustomed to that as well as other customs and conditions of a strange land.

Dr. Mary was built straight and clean-cut. Just a little Scotch accent made her voice seem all the more musical. While she was outspoken, there was a little twinkle in her eye which attracted one to the many pleasantries and endearing mannerisms of her staunch character.

Dodds died at the age of 85 of influenza at her home, 4600 Westminster Place, on January 3, 1928. She left an estate of $84,663.00. The will specifies $500 each be given the Colored Orphans' Home, Blind Girls' Home and Home of the Friendless, and $2000 each to three nieces, Mrs. Richena Curehy, Mrs. Elizabeth Elliott and Mrs. Carrie Geyer. The income front $8000 left in trust, was to go to a brother, William Dodds. former Mayor of Xenia, Ohio, and at his death to the Mission Free School of the Church of the Messiah and the Neighborhood Association. The residue of the estate was to be divided among the three nieces and five nephews. George, F., Leslie J., Earle C., John C. and Edwin E. Dodds. Dodds was buried in Xenia, Ohio.