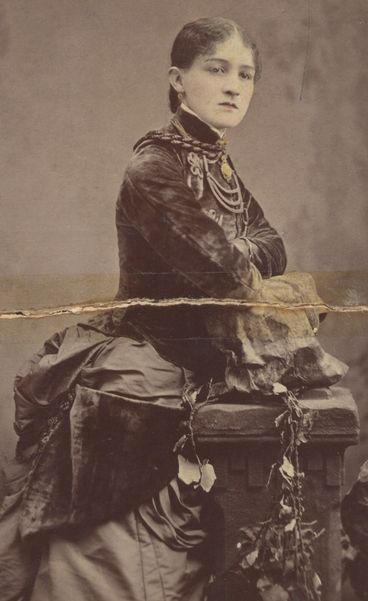 Mary Elizabeth Bennett Ritter was born June 7, 1860, the daughter of farmer William Bennett (died 1894) and Abigail Noble (1836- 1998), in Salinas, California. She graduated from Gilroy School in 1877. She taught school at Peachtree, San Juan and Fresno from 1877- 1883. She studied medicine with Dr. Euthausia S. Meade of San Jose, California 1883-1884 and then entered Cooper Medical College, San Francisco, where she received her M.D. degree in 1886. She interned at Children’s Hospital, Berkeley. She took over the general medical practice of Dr. Sarah I. Shuey of Berkeley in the late 1880's and practiced medicine until 1909.

Hearst and Ritter extended their interest in women students to their living conditions and became concerned about women living in off campus boarding houses. It was at the Ritter residence in 1900 that a group of women students founded the Prytanean Society, an organization of women students in their junior and senior years established to create cooperative residences. The society later named its first dormitory Mary Bennett Ritter Hall in her honor. The University of California acknowledged Dr. Ritter’s work as unofficial first dean of women when it conferred an honorary doctorate upon her on May 18, 1935.

Dr. Ritter resigned her medical practice and moved to La Jolla, California in 1909. Her husband was a founder and first director of the Marine Biological Station in La Jolla (later Scripps Institution of Biological Research, and then Scripps Institution of Oceanography) and E.W. Scripps, the benefactor of the station, felt that the station could grow only if the director was resident during the entire year. The Ritters lived on the La Jolla campus, first in a makeshift apartment in the laboratory, and beginning in December 1913, in a two storey wooden cottage built for them on campus.

Dr. Ritter became active in the community and in many women’s organizations. She was very closely associated in her work with philanthropist Ellen Browning Scripps and Dr. Charlotte Baker, a prominent San Diego obstetrician. Ritter gave lectures in social hygiene to local schools and, during the first World War, to soldiers and sailors in San Diego under the auspices of the Interdepartmental Commission of the federal government. She was a member of the Social Hygiene Board of Washington, D.C. She served on the boards of the YMCA, Pacific Coast Branch, the State Federation of Women’s Clubs, and other organizations. She was President of the La Jolla Women’s Club, chairman of Traveler’s Aid Committee for California, Chairman of the Social Service Department of the Civic Center, San Diego and served as a delegate to the National Convention of the League of Women Voters held in Richmond, Virginia in 1925. She traveled widely both with her husband and alone. For instance, she accompanied her husband on a trip to Japan in 1906 and the couple spent four months residence in Washington, D.C. in 1921.

In 1923, William Emerson Ritter retired as Director of the Scripps Institution and the couple returned to Berkeley. They had no children. Dr. Ritter published her autobiography, More than Gold in California, in 1933 (Berkeley: Professional Press, 1933). Dr. Ritter's eyesight failed in 1933, and she learned Braille. After her husband's death in 1944, she moved to Palo Alto to be closer to her niece and nephew, Mr. and Mrs. Robert L. Cody. She died in Mountain View, California, March 17, 1949.