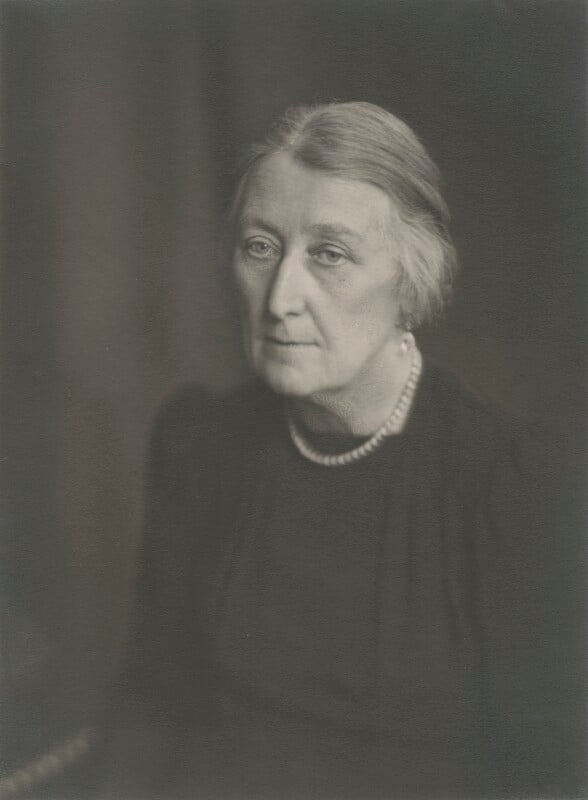 She was a British biochemist. In 1945, she was one of the first two women (the other being Kathleen Lonsdale) elected a Fellow of the Royal Society.[1]

She wrote Bacterial Metabolism (1930), which ran to three editions and was a standard textbook for generations of microbiologists. A founder of the Society for General Microbiology, she also served as its second president.[2] In 1953, the Society established the Marjory Stephenson Memorial Lecture (now the Marjory Stephenson Prize Lecture) in her memory.[2] This is the Society's principal prize, awarded biennially for an outstanding contribution of current importance in microbiology.[3]

Stephenson grew up in Burwell, a village on the edge of the Fens in Cambridgeshire, between Newmarket and Cambridge. Her father Robert (1847–1929) was a farmer, surveyor and owner of a cement-manufacturing company; her mother was Sarah Rogers (1848–1925). Robert Stephenson was a prominent figure in the local community, appointed as a Justice of the Peace and then Deputy Lieutenant of Cambridgeshire; he was also a chairman of the County Council. He employed many local people in his cement works. Both Stephenson's grandfathers, Robert Matthew Stephenson (1815–1870) and Samuel Rogers, were racehorse trainers in Newmarket, a major horse-racing centre. Samuel Rogers had been a jockey before becoming a trainer.[4]

Stephenson was the youngest of the family by nine years.[4] She was first inspired to take an interest in science by her governess Anna Jane Botwright, the daughter of a carpenter from Bungay. (The governess later married a solicitor and named one of her daughters Marjory). Stephenson later studied at the Berkhamsted School for Girls in Hertfordshire.[5]

In 1903 she went to Newnham College, Cambridge. Alice Mary Stephenson, one of her sisters, had studied history at Newnham College (she became headteacher of Francis Holland School in London), and a brother, Robert, graduated from Pembroke College, Cambridge. Stephenson read Natural Sciences, taking courses in chemistry, physiology and zoology for Part I of the Natural Sciences Tripos.[4] At this time women were still excluded from Cambridge University's chemistry and zoology laboratories; Newnham College had its own chemistry laboratory and women attended biology practicals in the Balfour Laboratory.[4]

Stephenson originally intended to study medicine after Newnham, but her plans changed due to a lack of funds and she became a domestic science teacher, first at Gloucester County Training College and then at King's College of Household Science, London.[4] In London she shared a flat with historian Myra Curtis, who was later Principal of Newnham College. As Stephenson did not find domestic science fulfilling, she was grateful when Robert Plimmer, co-founder of the Biochemical Club (later Society), invited her to become a researcher in his laboratory at University College London. Here she investigated fat metabolism, and also taught nutrition. She was awarded a Beit Memorial Fellowship in 1913, but her work was interrupted by the First World War.[4]

After joining the Red Cross, Stephenson ran hospital kitchens in France; later she became a VAD (Voluntary Aid Detachment) commandant in Salonika. She was mentioned in despatches, and, in December 1918, she was awarded the MBE and an Associate Royal Red Cross in recognition of her service.[6] As a result of her war-time experience, she became a pacifist. Later she was an active member of the Cambridge Scientists' Anti-War Group.[4]

After the end of the war, Stephenson returned to Cambridge to carry out research and teach in the department of biochemistry. Under the leadership of Frederick Gowland Hopkins, a group of scientists became the centre of modern biochemical studies. Here Stephenson began research on bacteria and their metabolism. The department had an unusually high proportion of women amongst its researchers (15 per cent), but it was still very rare for a woman to be offered a University appointment. Stephenson was financed by her Beit Fellowship and later by the Medical Research Council. She was finally appointed a University lecturer in biochemistry in 1943. Meanwhile, she became an associate and later a fellow of her old College, Newnham. In 1936 the University awarded her an ScD degree for her research.[4]

Stephenson's main area of research was bacterial metabolism. With Margaret Whetham and Juda Quastel, she developed the washed suspension technique, which had originated with Louis Pasteur, for extracting enzymes from bacteria. With Leonard Stickland, she was the first to isolate a bacterial enzyme from the cell in 1928, when they obtained lactic dehydrogenase from Escherichia coli. In the 1930s, she continued to work with Stickland and demonstrated that a particular enzyme, formate hydrogenlyase, was present in cell extracts only when the bacteria had been grown in the presence of formate. This was one of the first examples of 'adaptive enzymes.' (This is now understood as the rapid transcriptional activation of the gene encoding the formate hydrogenlyase when the inducer molecule, formate, is added to the culture). Later in the 1930s Stephenson worked with Ernest Gale on enzyme adaptation and amino acid metabolism, and with Arthur Trim on metabolic studies of nucleic acids.

During her time at the laboratory, Stephenson produced, as author or co-author, more than twenty papers. She is most widely remembered for her seminal book, Bacterial Metabolism, which ran to three editions between 1930 and 1949. Last reprinted in 1966, it was the standard work on the subject for generations of microbiologists and biochemists.[4]

In 1935 she built the house in Latham Road where she lived for the last fourteen years of her life. It was modern in design and had a large garden which gave her a great deal of pleasure. Inheriting one of her father’s interests she planted many fruit trees in which she took an increasing interest as time went on, so that she became extremely well-informed about grafts and scions and the attractive mysteries conected with them. She knew the East Mailing Station where she had friends among the scientific workers. She had the countryman’s capacity to draw comfort and happiness from growing things. This house was of some importance in the growth and development of her personality. Marjory Stephenson had always had a gift for a kind of friendship that had an active, work-a-day quality. This house partly by its situation and partly by its happy construction and its pleasant garden gave her great oppor­tunities for the expression of her relationship with other people. Her informal hospitality could be given scope here so that she would entertain the most various people. Colleagues could discuss work and difficulties in a quiet and happy environment; personal friends could relax and idle in the sun on the veranda and good conversation flourished. The atmosphere of this house and the pleasant rather casual kindness that seemed always to inform it have given happy memories to many of her friends and to many people also who would hardly claim the title.

In 1902 Hertha Ayrton was the first woman to be proposed as a Fellow of the Royal Society but was rejected because the society's lawyers successfully argued that it was impossible for a woman to be a Fellow. The Sex Disqualification (Removal) Act 1919 and a Privy Council ruling on the legal status of women in 1929 rendered these arguments obsolete. But, it was not until 1943 when, spurred to action by a critical article in the Daily Worker by Jack Haldane, the Royal Society considered accepting women as Fellows. Charles Harington nominated Stephenson and, after a ballot in which a large majority of Fellows voted to accept women, she was duly elected in 1945 together with Kathleen Lonsdale.[4] During the World War II, Stephenson served on the Toxin Committee.

One of the founders of the Society for General Microbiology, and Alexander Fleming tried to induce her to take the role of the Society's first President, but she declined; Stephenson was elected as its second president in 1947[7]. After the war the Rockefeller Foundation and the Medical Research Council funded a new laboratory at Cambridge (known as the "Bug Hut"), to which she moved in 1947. Stephenson was also influential in improving teaching of microbial biochemistry; she helped set up a special Part II Biochemistry (Microbial) in Cambridge in the same year.[4]

Also in 1947 she was finally recognised by the university for her many years of service; they appointed her as the first Reader in Chemical Microbiology, a permanent position. She died of cancer on 12 December 1948, a year after the university appointment.[4]

Her biographer said of Stephenson: "She made her way in science by pioneering her own field, and her life was her work and her friends."[4] She also found time to do gardening and to travel, visiting the United States and the USSR in the 1930s.[4]