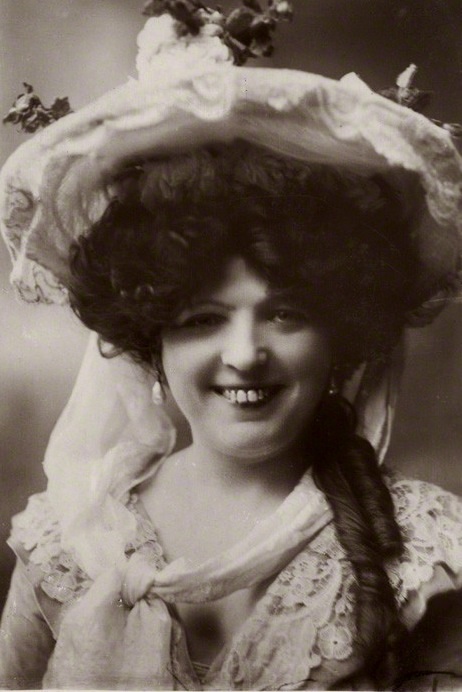 She was an English music hall singer, comedian and musical theatre actress. She was best known for her performances of songs such as "The Boy I Love Is Up in the Gallery", "My Old Man (Said Follow the Van)" and "Oh Mr Porter What Shall I Do". She received both criticism and praise for her use of innuendo and double entendre during her performances, but enjoyed a long and prosperous career, during which she was affectionately called the "Queen of the Music Hall". Born in London, she was showcased by her father at the Eagle Tavern in Hoxton. In 1884, she made her professional début as Bella Delmere; she changed her stage name to Marie Lloyd the following year. In 1885, she had success with her song "The Boy I Love Is Up in the Gallery", and she frequently topped the bill at prestigious theatres in London's West End. In 1891, she was recruited by the impresario Augustus Harris to appear in that year's spectacular Theatre Royal, Drury Lane Christmas pantomime Humpty Dumpty. She starred in a further two productions at the theatre, Little Bo Peep (1892) and Robinson Crusoe (1893). By the mid-1890s, Lloyd was in frequent dispute with Britain's theatre censors due to the risqué content of her songs. Between 1894 and 1900, she became an international success when she toured France, America, Australia and Belgium with her solo music hall act. In 1907, she assisted other performers during the music hall war and took part in demonstrations outside theatres, protesting for better pay and conditions for performers. During the First World War, in common with most other music hall artists, she supported recruitment into the armed services to help the war effort, touring hospitals and industrial institutions to help boost morale. In 1915, she performed her only wartime song "Now You've Got Your Khaki On", which became a favourite among front-line troops. Lloyd had a turbulent private life that was often the subject of press attention: she was married three times, divorced twice, and frequently found herself giving court testimony against two of her husbands who had physically abused her. In later life, she was still in demand at music halls and had a late success in 1919 with her performance of "My Old Man (Said Follow the Van)", which became one of her most popular songs. Privately, she suffered from bouts of ill-health and became alcohol-dependent, both of which imposed restrictions on her performing career by the 1920s. In 1922, she gave her final performance at the Alhambra Theatre, London, during which she became ill on stage. She died a few days later at the age of 52.