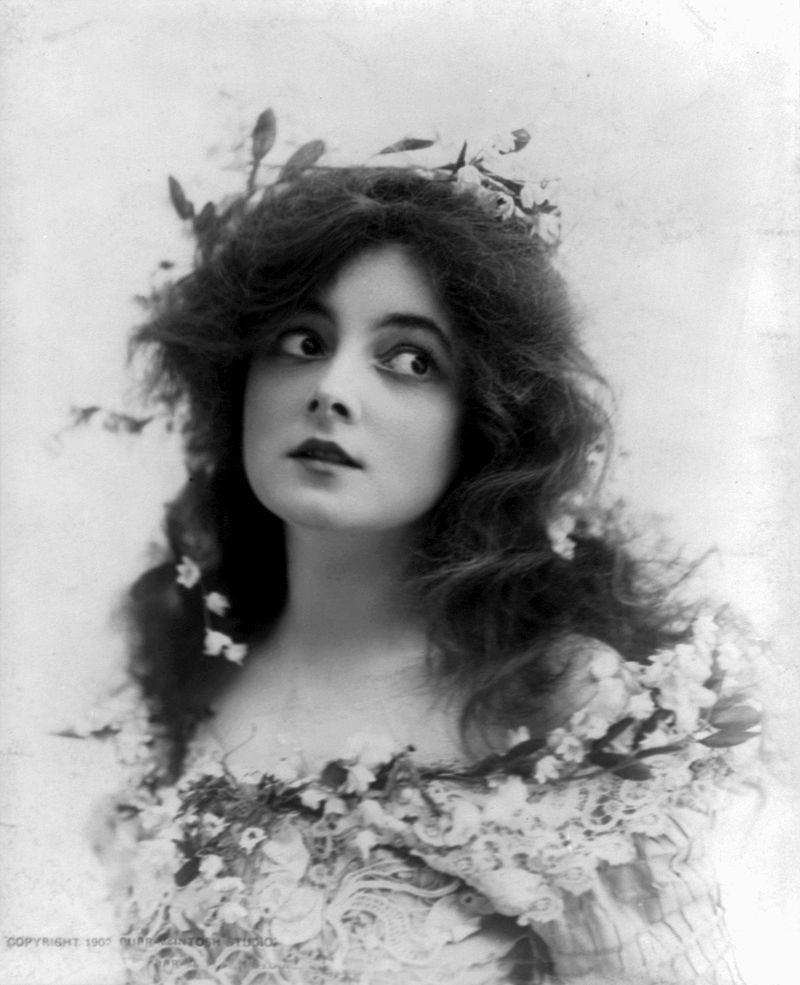 Marie Doro (born Marie Katherine Stewart; May 25, 1882 – October 9, 1956) was an American stage and film actress of the early silent film era. She was first noticed as a chorus-girl by impresario Charles Frohman, who took her to Broadway, where she also worked for William Gillette of Sherlock Holmes fame, her early career being largely moulded by these two much-older mentors. Although generally typecast in lightweight feminine roles, she was in fact notably intelligent, cultivated and witty. On Frohman's death in the RMS Lusitania in 1915, she moved into films, initially under contract to Adolph Zukor; most of her early movies are lost. After making a few films in Europe, she returned to America, increasingly drawn to the spiritual life, and ended as a recluse, actively avoiding friends and acquaintances. In the early 1950s author Daniel Blum interviewed and included her in his book Great Stars of the American Stage, an homage to many theater performers, some dead, some still living at the time like Doro. Blum wrote a quick and mostly accurate run-down of her life and career and included several portraits from her Broadway years. He also included an early-1950s photo for fans who remembered but hadn't seen her in decades.[1]

Marie Katherine Stewart was born to Richard Henry Stewart and Virginia Weaver in Duncannon, Pennsylvania on May 25, 1882, and began her career as a theater actress under the management of Charles Frohman before progressing to motion pictures in 1915, under contract with film producer Adolph Zukor. She was briefly married to the vaudeville and silent screen actor Elliott Dexter;[2] the marriage soon ended in divorce. The marriage produced no children and Doro never remarried. Her name was linked over the years to much older William Gillette of Sherlock Holmes fame, who was consistently linked by the press with his leading ladies. The two appeared in The Admirable Crichton in 1903, in which the young Doro had a small part, Clarice and Sherlock Holmes in 1905–06, and Diplomacy in 1914. She also starred in Gillette's 1910 production of Electricity. On a tour of England, she acted with the unknown teenage Charlie Chaplin, who was besotted with her. Later, when he was famous, they met in America, but she had to confess that she had no memory of him.[3] Doro was a Dresden doll-like brunette, described by drama critic William Winter as "a young actress of piquant beauty, marked personality and rare expressiveness of countenance."[4] She was talented, beautiful and a star in her own right. The few silent films of hers that survive show a gifted natural actress who did not always get the best parts. Lowell Thomas, the traveler, writer, and broadcaster, knew Doro well, saying that "her fragile-looking type of pulchritude caused her to be cast in usually insipid, pretty-pretty roles." Offstage, she was intelligent, an expert on Shakespeare and Elizabethan poetry, and possessed a penetrating humor and a sometimes acid wit. "She became associated with Gillette quite early in her career and he, a man of strong and powerful mind, exercised considerable influence over her development."[5] As she later admitted, "For years I was hypnotized by two men—Frohman and William Gillette."[6]

Like many other young women, she started out in the chorus in musical comedy productions, finally performing as a single character in a program in San Francisco in 1903. From there she went to New York, appeared as Rosella Peppercorn in The Billionaire which starred Jerome Sykes and as Nancy Lowly in The Girl From Kays. She caught the eye of Frohman, who saw in her distinct possibilities for stardom and cast her as Lady Millicent in James M. Barrie's Little Mary, which opened at the Empire Theater on January 4, 1904. Later that year the legendary Mrs. G. H. Gilbert—who with John Drew, Ada Rehan and James Lewis had been one of Augustin Daly's "Big 4," but who had spent decades supporting bigger stars—was finally given a starring vehicle of her own, Clyde Fitch's Granny. It was to be Mrs. Gilbert's farewell tour, with Marie playing Dora, the ingenue. And a farewell tour it was. The play was well received in New York but, four days after its Chicago opening, on December 2, 1904, Mrs. Gilbert died at the age of 83. The following January, Doro created the title role of Friquet at the Savoy, and it was William Collier's company, performing The Detective, that took her to London later that year. After The Detective closed, Frohman cast her in the heroine's role in Gillette's Clarice, a role she filled for the next two years. Doro then appeared in The Morals of Marcus, followed in March 1909 by The Richest Girl, and in 1910 in Gillette's Electricity. Her career was now definitely on the rise, for in 1912 she joined Nat C. Goodwin, Lyn Harding and Constance Collier in a dramatization of Charles Dickens' Oliver Twist, one of the earliest productions of that work, as well as appearing with De Wolf Hopper in an all-star production of Gilbert and Sullivan's Patience. She played opposite Charles Terry in The New Secretary in 1913, and the following year joined Gillette in Diplomacy. Doro's stage career ended with Frohman's death on the Lusitania in 1915, after which she made eighteen motion pictures and achieved several milestones, one of them being her appearance in the first presentation of 3-D films in front of a paying audience. Her film debut for Zukor's Famous Players studio was the starring role in the now lost feature film The Morals of Marcus in 1915 based on the 1907 Broadway play she had starred in. The following year she played the lead in the 1916 film version of Charles Dickens' Oliver Twist, a role she previously played with much acclaim on stage in 1912. Throughout the 1910s, Doro remained a highly respected and popular leading lady. Most of her earliest screen appearances are now lost.[7] One of the few to survive is Lost and Won from 1917. Although still a popular leading lady, by the early 1920s Doro became increasingly disillusioned with Hollywood and her acting career. She returned to the Broadway stage one last time in 1921 with Josephine Drake in Lilies of the Field. She made two more feature films, the last of them being Sally Bishop, but left Hollywood in 1924, relocated to Europe for a time and made a number of films in Italy and the UK. Returning to the United States, she became increasingly reclusive and drawn to spiritual matters. After moving to New York City, she briefly studied at the Union Theological Seminary. She spent the rest of her life in seclusion. She would often go on self-styled "retreats" in which she went to extremes to elude friends and acquaintances, even to the point of changing hotels four times a week.[8]

In 1956 she died of heart failure in New York City, New York, aged 74. She allocated the $90,000 in her will to the Actors' Fund. She was buried at the Duncannon Cemetery in Duncannon, Pennsylvania. For her contributions to the motion picture industry, Marie Doro was awarded a star on the Hollywood Walk of Fame at 1725 Vine Street in Hollywood, California, US.