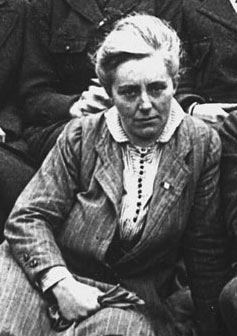 ffrench-Mullen was a member of the radical nationalist women's organisation Inghinidhe na hÉireann. In 1913 during the Dublin Lock-out, she worked in the soup kitchen in Liberty Hall. She subsequently joined the Irish Citizen Army (ICA).[1] In the Easter Rising she worked in a first aid tent. She was arrested following the Rising but released the following month.[1] She joined Sinn Féin and was elected to Rathmines District Council in 1920.[1]

ffrench-Mullen's interest in politics started young, Her father was a committed Parnellite and their Dundrum home was a campaign headquarters. She was a radical feminist and republican during her life. Like many other of the time she regarded it as a woman's right to vote. She joined the suffrage movement, and met women with a similar worldview and values. The women's suffrage movement was included in the Movements of Extremists reports of the Dublin Metropolitan Police.[3] ffrench-Mullen went on to join Inghinidhe na hÉireann, a radical nationalist women's group founded by Maud Gonne in 1900. The organisation developed into Cumann na mBan in 1913. Suffragist values were central to Cumann na mBan's goal of standing side-by-side with men in the fight for the Irish Republic. Some members saw this as women regaining the rights that had belonged to them in pre-invasion Gaelic civilisation.[4] ffrench-Mullen was on the socialist wing of the moment, holding to the ideals of universal social equality of the syndicalist James Connolly and the Irish Citizen Army.

Kathleen and Madeleine pictured together in 1919

During the Easter Rising of 1916, ffrench-Mullen served as a lieutenant in the Irish Citizen Army. She saw action with the St Stephen's Green and Royal College of Surgeons garrison.[1][2][5] In St Stephen's Green she was in command of the 15 Citizen Army women who set up a medical station and field kitchen.[5][6] While occupying St Stephen's Green, she and her comrades came under sustained heavy fire from the Shellbourne Hotel[5] and buildings on the north side of the Green.[7] After the surrender of the College of Surgeons garrison ffrench-Mullen was one of the 77 women who had fought in the Rising who were imprisoned, among them her close friend Dr Kathleen Lynn. While in captivity ffrench Mullen was moved three times, spending time in Richmond Barracks, Kilmainham Gaol and Mountjoy Jail. She was released on 5 June 1916.[8]

ffrench-Mullen met Kathleen Lynn through Inghinidhe na h-Éireann.[6][9] She moved into Lynn's Belgrave Road, Rathmines home in 1915,[2] and they shared a life until ffrench-Mullen's death in 1944,[9] living together in Rathmines for 30 years.

ffrench-Mullen recorded in her prison diary in 1916 that she could face prison without fear once Lynn (whom she referred to as "the Doctor") and she were together.[7] Katherine Lynch of the Women's Studies Centre at University College Dublin describes them as partners, calling them part of a network of lesbians living in Dublin—which included Helena Molony, Louie Bennett and Elizabeth O'Farrell—who met through the suffrage movement and later became involved with the national and trade union movement.[10]

Madeleine ffrench-Mullen and Kathleen Lynn established Saint Ultan's Children's Hospital,[11] also known as Teach Ultan, was a female-run hospital for infants at 37 Charlemont Street, Dublin in 1919.[12] The hospital focused on children's health and wellbeing, an area that was perceived at the time as women's concern. In the aftermath of WW1 many health problems had arisen including a rise in venereal diseases such as syphilis, carried from soldiers returning home from war.[13] Many of Ireland's infants of the time suffered from congenital syphilis (inherited disease from mother at birth) this was a driving factor in the opening of St Ultan's hospital.[14] Tuberculosis was endemic in Ireland during its time as a British colony. Against steadfast opposition by the State and the Catholic Church, Lynn and ffrench Mullen established a vaccination project, vaccinating thousands of impoverished children who would certainly have succumbed to TB without their vaccines. Their success led to the foundation of Ireland's BCG programme, which has vaccinated all babies since the 1950s.