Louise Olivereau (1884 - March 11, 1963) was a Seattle anarchist, poet and teacher; Emma Goldman called her ”An idealist of the finest type of American womanhood”; she worked at the Ferrer Modern Day School in Portland, and for the I.W.W. in Seattle; she helped organize Goldman’s lectures in Portland. She served two years in prison for anti-conscription activism, and corresponded with Goldman in Jefferson City Prison when Olivereau was in Canyon City, CO. She contributed to Mother Earth Bulletin after Goldman was imprisoned and Mother Earth closed down.

Louise Olivereau was the daughter of immigrants, with a French father, a minister, and a German mother. She was born around 1884 in Wyoming and educated as a stenographer at what later became Illinois State University. She worked in resort camps as a cook. An anarchist and poet, she acted as assistant to William Thurston Brown in setting up a Modern Schol in Portland, run on the principles of Francisco Ferrer. In March 1915 she and H.C. Uthoff set up the Portland Birth Control League, holding meetings and distributing literature, following local agitation by Emma Goldman. She moved to work as a stenographer in the offices of the Industrial Workers of the World (IWW) in Seattle later in the year.

When the United States went to War on the side of the Allies in 1917, Congress passed The Espionage Act in June of that year, making it a crime to incite insubordination in the armed forces, to obstruct the recruitment of soldiers, and to use the mails to do so. The IWW took an anti-war position, and already targeted by the authorities because of their agitation among workers, now became seen as even more of a threat.

In August 1917, Olivereau spent $40 of her own money (she only earned around $15 dollars a week) to mimeograph and post letters and circulars encouraging young men to refuse the draft and become conscientious objectors. On September 5, 1917, Bureau of Investigation agents, raided the Seattle IWW and confiscated literature. 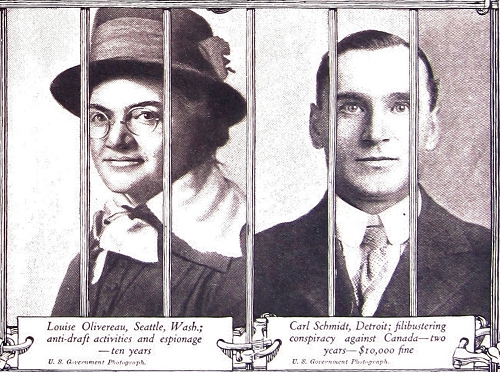 Two days later, Olivereau went to the agents' office to retrieve her property. The agents attempted to get Olivereau to admit that the IWW was behind the circulars, but she insisted that she acted alone. They went with her to her home where they confiscated more documents and then arrested her. She later said that she had told the agents that “if out of 2,000 circulars I could persuade five men to consider the connection between the individual and government and war, I would consider myself quite successful”.

Olivereau was indicted on three counts of violation of The Espionage Act in connection with a letter and circular posted to one man in Bellingham. At the trial, she defended herself, saying that an attorney "would worry more over getting me a light sentence than over the preservation of the ideals I care for more than for my own liberty."

In court she readily admitted her actions, defended her concept of Anarchism and described the American government as an apparatus to protect the property of the rich. The jury convicted Olivereau and the judge sentenced her to 10 years in prison on November 30th 1917. He ﬁnished by declaring Miss Olivereau a woman above the average in intelligence, and hoped she would change her ideas to conform to organized government.

She served 28 months in the state penitentiary in Cañon City, Colorado, before being paroled. The first year she was not allowed to receive any letters, magazines or newspapers.The IWW provided no support for Olivereau or her case because of her openly professed allegiance to anarchism in court. Her case was hardly mentioned in IWW newspapers and no other IWW member attended her trial. Only Anna Louise Strong, whom she knew from her visits to the IWW offices, appeared in court to support her. As a result she lost her job with the Seattle School Board and subsequently started working as a radical journalist.

Despite this, Olivereau , once the ban on newspapers was lifted, always looked forward to receiving IWW newspapers in jail. She ran classes in prison teaching other prisoners English.

Released in March 1920, Olivereau stayed with a friend in Portland, Oregon, where she spoke to union meetings and women’s clubs, distributed pamphlets and supported herself with secretarial work. She spoke to Finnish workers in Portland on May Day. She planned on giving the proceeds of her meetings to support the movement in Mexico inspired by the anarchist Ricardo Flores Magon. She got a job as a stenographer but was disgusted that as an anarchist she had to type out a book on accounting. When she told the boss that he should give his workers a pay rise she was sacked. She then was contemplating, according to the last letter she wrote to friends in the movement, looking to work in a delicatessen or a café. These last few letters of hers reveal her sadness at the way so many of her old friends would have nothing to do with her because of her anti-war stance. She now disappeared into obscurity, continuing to work at a variety of clerical and sales jobs in Oregon and California. She settled in San Francisco in 1929 and worked as a stenographer. She died there on March 11th 1963.