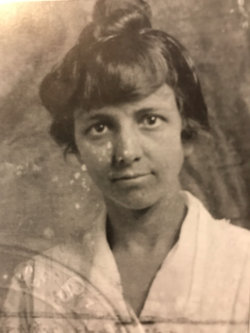 Mary Louise Marshall (April 9, 1888 - February 5, 1981) was the founder of the Cabbage Patch Settlement House in Louisville in 1910. Women such as Katherine Pettit of Lexington, who established the Hindman Settlement School in 1902, and Louise Marshall chose reform work over marriage. In the case of Marshall, late in life she characterized her settlement work as “one long love affair.”

Louise Marshall was the daughter of Burwell Keith Marshall and Elizabeth Welsh Veech. Marshall was a member of the Second Presbyterian Church and she founded the Cabbage Patch Settlement House when she was 16 years old.

The Cabbage Patch area of Louisville was well known throughout the English-speaking world at the beginning of the twentieth century, thanks to the best-selling book Mrs. Wiggs of the Cabbage Patch (1901) by Louisville author Alice Hegan Rice. The book, set at the turn of the century, is a simple and somewhat sentimental story of a poor but cheerful widow who lived with her five children in a small cottage adjacent to railroad racks. The family overcame all sorts of hardships, aided by a wealthy young woman who spent much of her time helping the poor. It was there that Louise Marshall chose to open the Cabbage Parch Settlement House in 1910 that focused on the specific needs of the residents. The facility was first located at 1461 S Ninth St and then at 1409-1413 S 6th St. Marshall described the surroundings as "a section where there were truck gardens and there were people from the L & N shops who lived around them. The truck gardeners raised cabbages." In truth, most shop people lived in Limerick, north of the Patch. Rice's fictional description coincided with Marshall's: "It was not a real cabbage patch, but a queer neighborhood, where ramshackle cottages played hop-scotch over the railroad tracks. Thera were no streets, so when a new home was built the owner faced it any way his fancy prompted. Mr. Bagby's grocery, it is true, conformed to convention, and presented a solid front to the railroad track, but Miss Hazy's cottage shied off sidewise into the Wiggses' yard, as if it were afraid of the big freight-trains that went thundering past so many times a day."