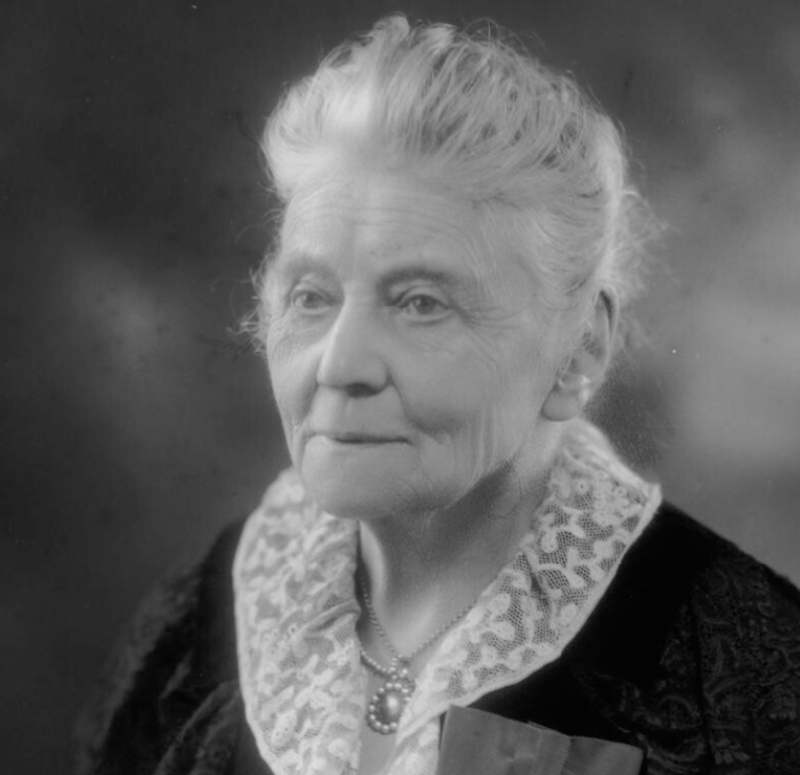 Dame Louisa Innes Lumsden DBE (31 December 1840 – 2 January 1935) born in Aberdeen, Scotland, was a pioneer of female education. Louisa Lumsden was a student and a tutor in classics at Girton College, Cambridge, the first Headmistress of St Leonards School, Fife, and the first warden of University Hall, University of St Andrews.[1] She is credited with introducing lacrosse to St Leonards School.[2] When the Scottish suffrage organisations organised the planting of a commemorative tree to celebrate (some) women getting the vote in 1918 then Lumsden had the honour of planting The Suffragette Oak. In education, Constance Maynard was a pioneer of higher education for women in Britain, and she was instrumental in the development of Westfield College in the University of London. She herself had been privileged to take advantage of the recently established Girton College in 1872, and it was during her three years there that she formed a passionate attachment to Louisa Lumsden, who referred to Constance as her ‘wife’. The two young women moved to Scotland after graduating to further Louisa’s teaching career, living together as any other married couple would. Sadly, religious differences forced them apart and Constance returned to London where her own career was to blossom, and she could pursue her devotion to her faith as she wished without Louisa’s agnosticism getting in the way.

Louisa Lumsden was the third daughter and final of seven children of Clements Lumsden, advocate in Aberdeen and Writer to the Signet, and Jane Forbes.[3][4] Following the death of her father in 1853, when she was 12, Louisa's mother moved temporarily to Cheltenham and Louisa attended a private school there, followed by a period as a boarder at the Chateau de Koekelberg, Brussels, and left there in 1856 to attend a smaller school in London.[3][4] She returned to live at home with her family in Aberdeenshire in 1857.[4]

The Edinburgh Ladies Education Association, later the Edinburgh Association for the University Education of Women, ran classes for women with lectures given by University of Edinburgh professors.[5] Louisa Lumsden attended classes in the winter of 1868-9.[4] However women students were not entitled to full access to degrees.[6] A college for women was established by Emily Davies in 1869 in Hitchin a village 27 miles from Cambridge, as the first college for women students studying for the Cambridge Tripos examinations on equal terms with men.[7] As Girton College it moved to new buildings at its present site in 1873.[8] Louisa Lumsden was one of the first five students to be taught at the Hitchin women's college and one of the first three female students to sit University of Cambridge Tripos examinations unofficially in Lent term 1873, the others being Rachel Cook and Sarah Woodhead; these three were commemorated in song as the Girton Pioneers.[9] Louisa Lumsden is recorded as having been a student at Girton between 1869 and 1872, a tutor 1873-4 and awarded the Classical Tripos in 1892.[1] She resigned her post as tutor after conflicts with Emily Davies about neglect of student welfare.[10]

A girls school was founded in St Andrews, Fife, in 1877 and Louisa Lumsden was its first headmistress (1877-1882).[11][12] St Leonards was the first school for young women in Scotland modelled on an English public school; the progressive curriculum included classics, mathematics and sports.[13] Prior to this Lumsden had been teaching classics at Cheltenham Ladies College (1876-7).[3] Louisa Lumsden's close friend from her Cambridge days, Constance Maynard, accompanied her from Cheltenham to St Andrews and helped to establish the school.[3] Maynard left in 1880 and went on to become the first principal of Westfield College (1882–1913). Louisa Lumsden resigned as headmistress in January 1882 citing ill health and Frances Dove, who also studied at Girton and taught at Cheltenham, was appointed to St Leonards.[4]

Lumsden, in a letter written home from the White Mountains in New Hampshire dated 6 September 1884, recounted her visit to watch the Canghuwaya Indians play lacrosse against the Montreal Club in Montreal. She wrote: It is a wonderful game, beautiful and graceful. (I was so charmed with it that I introduced it at St Leonards.)"[4] Rosabelle Sinclair, who established the first women's lacrosse team in the United States attended St Leonards between 1906 and 1910. Rosabelle Sinclair established lacrosse for girls at the Bryn Mawr School in Baltimore, Maryland.[14]

University Hall, the first residential hall for women students in Scotland, was founded at St Andrews University in 1895 and Louisa Lumsden was appointed its first warden.[13] The intention was to create a Scottish version of Girton, but it met some resistance from both men and some of the female students it was intended for and Lumsden resigned her post in 1900.[3]

In 1908 Louisa Lumsden accepted an invitation to become president of the Aberdeen Suffrage Association.[3][4] She was a non-militant suffragist and provided a caravan called 'Curlew' which was used by campaigners to travel around the country.[15] In 1913 she made a speech at a rally in Hyde Park, London, on behalf of the Scottish branch of the National Union of Women's Suffrage Societies and later became one of a number of vice-presidents of the Scottish Churches' League for Woman Suffrage.[3][16] She was the person who planted The Suffragette Oak in Glasgow which was tree of the year in 2015.[17]

Louisa Lumsden was awarded an honorary Doctor of Laws degree (LL.D) by St Andrews University at the university's Quincentenary celebrations in 1911.[13] Under a Girton College charter, Louisa Lumsden was made a life governor of Girton in 1924.[1] She was created a dame in 1925.[1] The Lumsden Club is named in honour of Louisa Lumsden; its members are current female students at the University of St Andrews and its objective is charitable fund raising.[18]