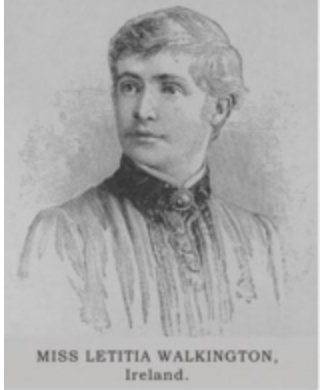 She was an Anglo-Irish lawyer who was the first woman to graduate with a degree of Bachelor of Laws in Great Britain or Ireland, which she received from the Royal University of Ireland.[2][3]

Walkington was born about 1857[1] in Belfast and lived most of her life on Belmont Road in Strandtown.[4] She was the daughter of Thomas R. Walkington and Letitia Von Heyn. She had at least one sister, Edith (died 1941). The family were well connected in the city; Edith and Letitia were both left money by Gustav Wilhelm Wolff of Harland and Wolff.[5] She did not attend school until she was 16, instead being educated at home by governess. Then she went to a boarding school and to school in Paris.[6] Finally she attended the Royal University of Ireland in Dublin and matriculated in 1882. She studied at Methodist College Belfast[7] and law at Queen's College, Belfast. Her mentor was the barrister Mr. Thomas Harrison, She completed her BA. degree in 1885, her M.A. in 1886, the LL.B. in 1888 and her LL.D in 1889 becoming the first woman to complete the last 3 degrees.[6][8] Unable to obtain a suitable position as a solicitor or get to join the bar, Walkington coached other young women for examinations since there were limited opportunities for them in the schools. In 1889 Walkington took part in the "Congres International des Euvres et Institutions Feminines," in connection with the Paris Exhibition. She attended as part of the Dublin Women's Suffrage Committee. Walkington also worked on a device for embossing Braille.[9][10][11]