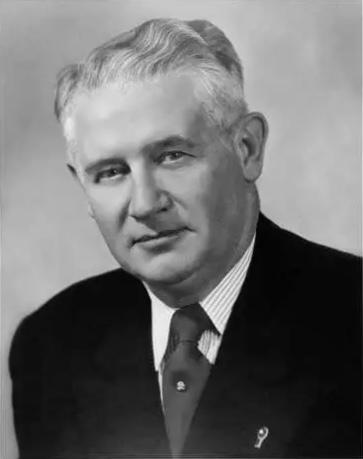 On June 9, 1953, Hunt's 24-year-old son Lester Jr., known as "Buddy", who was a student and president of the student body at the Episcopal Theological School in Cambridge, Massachusetts,[18][a] was arrested in Washington, D.C., for soliciting prostitution from a male undercover police officer in Lafayette Square, just north of and adjacent to the White House property. It was his first offense, which police normally handled quietly as a matter for the offender's family to address, but the arrest became known to Senate Republicans.[23] According to Drew Pearson's Washington Merry-Go-Round column published after Hunt's death, senators Styles Bridges and Herman Welker threatened that if Hunt did not immediately retire from the Senate and agree not to seek his seat in the 1954 election, they would see that his son was prosecuted and would widely publicize his son's arrest.[24][25]

In a closely divided Senate, Hunt's resignation would have allowed Wyoming's Republican governor to appoint a Republican to fill the remainder of Hunt's term and to run as an incumbent in the 1954 election, possibly affecting the balance of power in the Senate in favor of Republicans.[26] Hunt refused, and in response, Republican Senators threatened Inspector Roy Blick of the Morals Division of the Washington Police Department with the loss of his job for failing to prosecute Buddy Hunt.[24][25] Buddy Hunt was prosecuted, and Senator Hunt attended the trial. On October 7, 1953, Buddy Hunt paid a fine for soliciting a plainclothes policeman "for lewd and immoral purposes", and on the same day, the Washington Post published the story. Buddy Hunt's attorney was quoted in an October 8 New York Times account as saying his client preferred "to avoid any further publicity."[27] Despite these brief media accounts, the arrest and prosecution of Buddy Hunt was not widely publicized at the time.[28]

In December 1953, Hunt told journalist Pearson that he would not stand for re-election if the opposition used his son's arrest against him,[24][25] fearing that the publicity would have a negative effect on his wife's health.[29] Despite the threats of publicity from his political opponents, including a specific threat to distribute in Wyoming 25,000 leaflets about his son's arrest,[4] Hunt did announce on April 15, 1954, that he would be a candidate for re-election.[30][31] A poll taken on April 5, 1954, gave Hunt 54.5% support, with his nearest opponent at 19.3%.[18]

In May 1954, as a member of the Senate's "liberal bloc", he proposed rules for Senate committees designed to eliminate some of Senator McCarthy's tactics.[32] Later that same month, Senator Bridges renewed his threat to publicize Hunt Jr.'s offense to Wyoming voters.[33][34] The Eisenhower administration, taking a different tack, offered Hunt a high-paying position on the U.S. Tariff Commission if he agreed never to run for the Senate again.[4] On June 8, 1954, following a medical examination at Bethesda Naval Hospital, Hunt changed his mind about running again, and wrote to the chair of the Wyoming Democratic party, citing health concerns as the reason: "I shall never again be a candidate for an elective office."[35] He did not, however, resign from the Senate.

On June 19, 1954, Senator Hunt shot himself at his desk in his Senate office, using a rifle he apparently brought from home, and died a few hours later in Casualty Hospital.[18] The New York Times reported that he acted "in apparent despondency over his health" and left four sealed notes.[36]

Allen Drury used Hunt's blackmail and suicide as the basis for his 1959 best-selling and Pulitzer Prize-winning novel Advise and Consent. In the novel, Senator Fred Van Ackerman from Wyoming uses a homosexual affair to blackmail Utah Senator Brigham Anderson. In 1962, the novel was made into a movie starring Henry Fonda and directed by Otto Preminger.