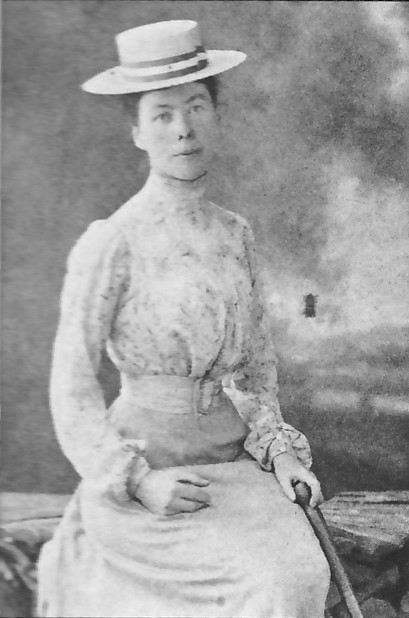 Helena Bertha Grace "Lena" Rice (21 June 1866 – 21 June 1907) was an Irish tennis player (then a British home nation) who won the singles title at the 1890 Wimbledon Championships. She is to date the only female player from Ireland to ever win a singles title at Wimbledon.

Lena Rice was born the second-youngest of the eight children of Spring Rice and Anna Gorde in 1866. Her family lived in a two-storied Georgian building at Marlhill, half a mile from New Inn, County Tipperary. When her father died in 1868, her mother struggled to manage the household. Lena learned to play tennis with her sister Anne in their large garden at Marlhill, and both girls entered the Cahir Lawn Tennis club.[1] Rice's first tournament outside County Tipperary were the Irish Championships at Dublin in May 1889. There she lost in straight sets to Blanche Bingley Hillyard in the semifinals. In doubles competition, she reached the final partnering Hillyard, and in mixed doubles she won the title along with Willoughby Hamilton.[2][1][3] Later that year, Rice played at the Wimbledon Championships. She reached the final where she met Hillyard once again. She won the first set 6–4 and had three match points at 5–3, 40–15 and advantage in the second, but Hillyard managed to come back and eventually won 4–6, 8–6, 6–4.[2][1][3] The next year, only four players participated at the singles event at Wimbledon. After winning over Mary Steedman in two sets in the first round, her opponent in the All-comers' final was May Jacks. Rice won 6–4, 6–1 and as defending champion Blanche Hillyard was pregnant and did not enter the tournament, Rice won the title, the 50-guineas challenger trophy and a cash prize of 20 guineas.[2][1][3] She is credited with inventing the Overhead Smash, employing it in her match-winning point against May Jacks in that 1890 final. Despite losing the singles final to Louise Martin at home in the Irish championships, Lena was backin Wimbledon on 4th July, 1890, competing in the Ladies Singles Championship finals. Only four competitors entered that year, the smallest entry for any competition at Wimbledon. As the defending champion Blanche Bingley could not compete that year because she was pregnant, Lena’s opponent was May Jacks. Lena walked onto the Centre Court wearing the acceptable attire for ladies’ tennis at the time; a floral patterned full-length skirt, a blouse with long sleeves, tightly clinched at the waist, a bustle, corset and a long petticoat, a boater hat and leather high-heeled boots on her feet. In the final game, when May Jacks lobbed the ball at her opponent, instead of waiting for the ball above her head to drop to waist height before returning it, as was expected at that time, Lena leapt into the air and smashed the ball over the net, where it bounced inside the baseline, winning the match in one stroke. The astonished spectators gasped and after a pause burst into applause. Lena had not only introduced the forehand smash, but had also become the first Irishwoman (and remains the only one to date) ever to win Wimbledom.

After her 1890 Wimbledon title, there is no record of Rice playing tennis at a tournament. She did not defend her Wimbledon title in the challenge round the following year. As her mother died in 1891, it seems likely that family ill health prevented her from continuing her tennis career.[1] Rice, who never married, died of tuberculosis on her 41st birthday in 1907. She was buried at the New Inn cemetery, close to her parents, her brother Samel and her sister Agnes.[1]