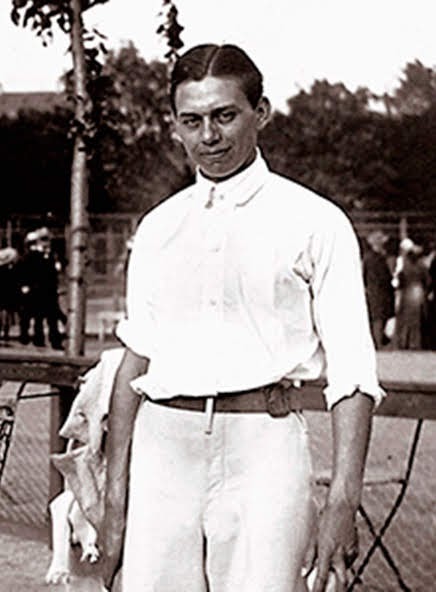 Ludvig Leif Sadi Rovsing, née Qvist (27 July 1887 – 17 June 1977) was a Danish tennis player. He competed in two events at the 1912 Summer Olympics.[1] As an openly gay man, he was excluded by Danish sports authorities who banned his participation in several sport tournaments.[2]

Born Qvist (his mother's name), Rovsing was adopted in 1889. From the death of his father in 1910, he lived the life of a wealthy gentleman of independent means. Except for a high-school diploma, he received no formal education. Tennis was his primary and all-consuming interest. He won several Danish championships in doubles, and was Swedish and Norwegian International Champion in 1916 (men's single). In 1923 he reached the finals (doubles) at the Indoor World Championships in Barcelona. He was considered to have a strong serve and a good drive.

Rovsing, who had decided not to be a witness in the court case, published a pamphlet in which he claimed that he was in reality the accused in ‘The Public’ versus Rovsing. Neither the exclusion from tournaments nor the court case and the pamphlet seem to have been reported in the press. Although Rovsing's perception was somewhat paranoid, it contained a large nucleus of truth.

In Hellerup, a suburb in northern Copenhagen, Rovsing in 1919 built himself a house and a magnificent wooden tennis hall which became the home of his own tennis club, the Dansk Tennis Club (The Danish Tennis Club). It neither was nor is affiliated with the Danish Lawn Tennis Association. It is partly financed through a foundation created by Rovsing in his will.

Rovsing travelled in the Far East and lived for a long period in Bali. In his book, I tropesol og måneskin (Under the Sun and the Moon of the Tropics), he gave a firsthand account of the delights of Balinese youths as opposed to the drab and restricting conditions in Denmark. In the 1950s he became a prolific contributor of articles to the homophile journal, Vennen (The Friend), which he briefly supported financially. In 1955 his home was ransacked by the police, and he was arrested and held in custody for 15 days charged with having had sex with a minor, a prostitute under the age of 18. He denied the charges, which he saw as a revenge for his writings, but was given a suspended sentence of 30 days in jail for indecency.

Rovsing in the 1950s and 1960s published a number of privately printed pamphlets on religion, sex and society. They are incoherent and characterised by the learning of an autodidact and a man whose perception of the social realities of his times is ill focused.