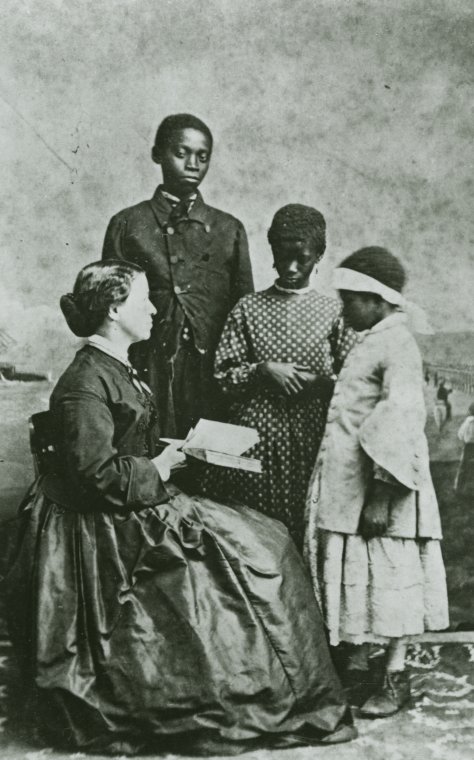 Laura Matilda Towne (May 3, 1825 in Pittsburgh, Pennsylvania – February 22, 1901, in St. Helena Island, South Carolina) was an abolitionist and educator. She was best known for forming the first freedmen's schools (schools for newly freed slaves). Laura Towne was buried at the Laurel Hill Cemetery in Philadelphia.

Laura Matilda Towne, the daughter of John Towne and Sarah Robinson was born on May 3, 1825 in Pittsburgh, Pennsylvania.

Laura Towne originally studied medicine when the American Civil War broke out. She was raised in Philadelphia hearing sermons about the abolition of slavery by her minister, William Henry Furness at the First Unitarian Church of Philadelphia. Influenced by these teachings, Towne answered the call for volunteers when the Union captured Port Royal and other Sea Islands area of South Carolina. With the help of her Quaker friend Ellen Murray (January 31, 1834 – April 7, 1908)[1] they founded the Penn Center on St. Helena Island, the first school for newly freed slaves in the United States.

The school started with nine students and operated out of the back room of a plantation house. Towne and Murray spent the next forty years of her life ministering to the freed slaves, developing their trust, providing them with medical care, teaching them to read and write, and fighting for their land rights. Towne and Murray eventually adopted several African American children and raised them as their own.

She took care of the school for the rest of her life and eventually gave up practicing medicine. After her death, Penn School was transferred to Hampton Institute, at which time it began operating as the Penn Normal, Industrial, and Agricultural School.