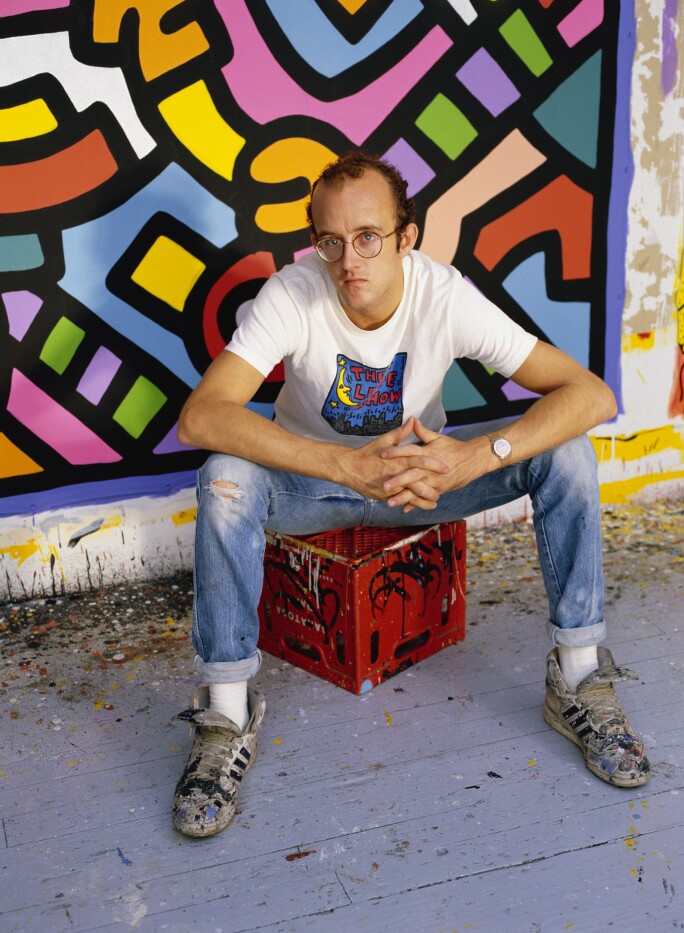 Haring was openly gay and was a strong advocate of safe sex;[6] however, in 1988, he was diagnosed with AIDS. From 1982 to 1989, he was featured in more than a 100 solo and group exhibitions as well as produced more than 50 public artworks in dozens of charities, hospitals, day care centers, and orphanages.[7] He used his imagery during the last years of his life to speak about his illness and to generate activism and awareness about AIDS. In 1989, he was invited by the Lesbian and Gay Community Services Center to join a show of site-specific artwork for the building at 208 West 13th Street. He chose the second-floor men's room for his mural ''Once Upon a Time''.[8] In June, on the rear wall of the convent of the Church of Sant'Antonio (in Italian: ''Chiesa di Sant'Antonio abate'') in Pisa (Italy), he painted the last public work of his life, the mural "Tuttomondo" (translation: "All world").

He (among others) is commemorated in the AIDS Memorial Quilt.[10]

As a celebration of his life, Madonna declared the first New York date of her Blond Ambition World Tour a benefit concert for Haring's memory and donated all proceeds from her ticket sales to AIDS charities including AIDS Project Los Angeles and amfAR; the act was documented in her film ''Truth or Dare.'' Additionally, his work was featured in several of Red Hot Organization's efforts to raise money for AIDS and AIDS awareness, specifically its first two albums, ''[[Red Hot + Blue]]'' and ''[[Red Hot + Dance]]'', the latter of which used Haring's work on its cover.