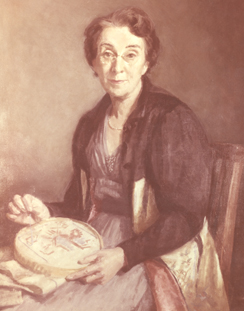 In 1951, Kathleen Chesney (1899-1976) became the successor of Mary Stocks as Principal of Westfield College.

Chesney read French at Lady Margaret Hall, Oxford . In 1923, she became Tutor in Modern Languages at St Hilda's College, Oxford , where she was later appointed Vice-Principal. She was known as a scholar of distinction in the area of early French literature and was awarded the Doctorate of Letters by Oxford University in 1954.

Her appointment as Principal of Westfield in 1951 helped to strengthen Westfield 's profile as an Arts College . In 1954, a Chair in English and a Chair in History, were established, and in 1955, Spanish was elevated to the status of an Honours Department.

Like several of her predecessors, Chesney was committed to Anglican worship, and welcomed the more frequent weekly Sunday Holy Communion celebrations during the late 1950s.

According to Janet Sondheimer, Chesney was known to be 'habitually modest and innately shy' and she served the College with dedication and care. During an influenza epidemic at the College, she is remember for tending the sick through the night, whilst still carrying out all her usual duties throughout the day.