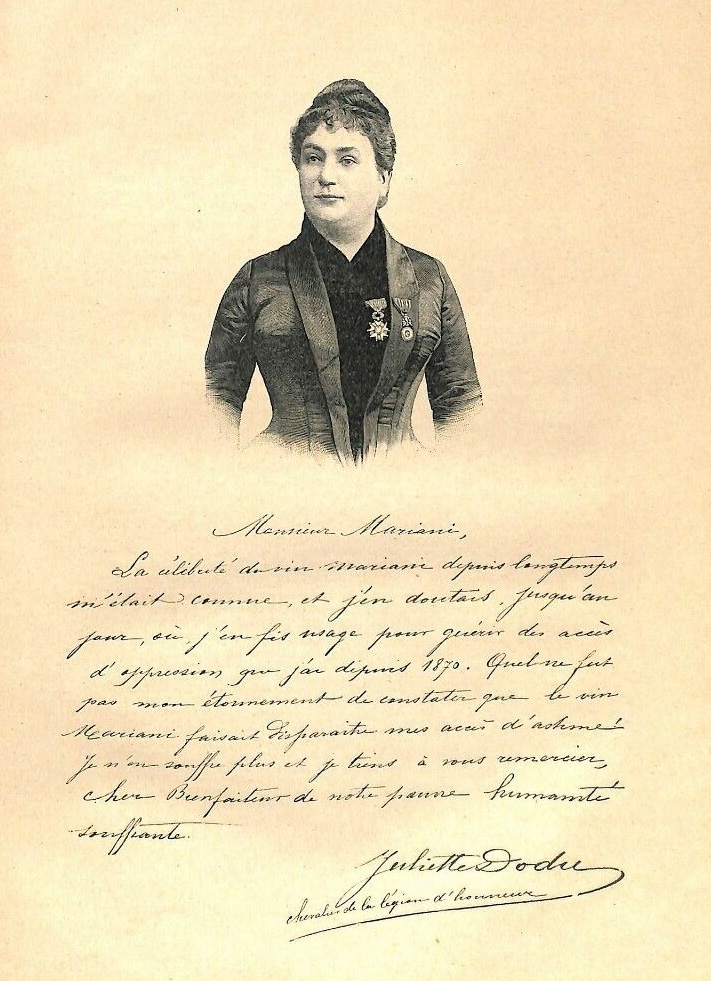 Juliette Dodu (Saint-Denis de la Réunion, June 15, 1848 – October 28, 1909) was a legendary heroine of the Franco-Prussian War of 1870, and the first woman to be awarded the Legion of Honor. However, many doubts have been raised about her actions during the war, and her story remains controversial.

Juliette Dodu was Born in Réunion, the daughter of Alphonse Dodu, a navy surgeon originally from Indre, and Desaïffre de Pellegrin, a créole. Her father died of yellow fever when she was two. In 1864, at the age of sixteen, she left the island with her mother, who found work in France as director of the telegraph office of Pithiviers (Loiret).[1]

It was in the course of the Franco-Prussian War of 1870 that she became famous. The Prussians occupied Pithiviers on September 20, 1870. The telegraph office was seized and the Dodu family was relegated to the second floor of the house. The young woman of twenty-two then had the idea to rig up a tap on the wire that passed by her room. Having kept a receiving apparatus, she was thus able to intercept the transmissions each time that the occupiers received or sent dispatches.

For 17 days, the young woman was able to deliver the dispatches to the French authorities without the slightest suspicion on the part of the Prussians, who were seduced by the charm of the young Frenchwoman. It was claimed that she saved the lives of 40,000 soldiers of General Aurelle de Paladines by means of one of her intercepted messages. However, the wiretap was discovered when a German soldier overheard a housekeeper accuse Juliette Dodu of tapping the telegraph wires. The Prussians prosecuted Juliette Dodu and tried her for espionage before a court-martial. She is reputed to have told her judges, Je suis Française et ma mère aussi, j’ai agi pour mon pays. Messieurs, faites de moi ce que vous voudrez ("I am French and so is my mother. I have acted for my country. Messieurs, do with me as you wish!"). She was condemned to death. But the armistice was signed before her execution and Juliette Dodu was pardoned by prince Frederick Charles of Prussia and set free.[2]

However, decree number 1942 of December 8, 1870 only accorded her an honorable mention, as well as the 20 other employees and agents of the telegraphic service, because the postal employees were utilized to aid the army in the use of the telegraph.

In 1873, Juliette Dodu was responsible for the telegraph office of Enghien-les-Bains, where she made the acquaintance of Hippolyte de Villemessant, the patron of Le Figaro. On May 26, 1877, the first known version of the "legend of Dodu" appeared in that journal.

Now cast as a symbol of the French resistance, Juliette Dodu was the first woman to receive the Military Medal and the Cross of the Legion of Honor. Patrice de Mac-Mahon, Marshal of France and president of the Third Republic, signed the decree of July 30, 1878, where it is stipulated " for intercepting dispatches at the peril of her life in 1870, for being condemned to death by the enemy and saved by the cessation of hostilities."[3]

Around 1875, she began a relationship with the baron Félix Hippolyte Larrey, medical chief of the army and son of the celebrated Larrey, and inherited his fortune (including his small château at Bièvres, Essonne). In 1880, she became inspector of schools and asylums and took up residence in Switzerland. Under the pseudonym of Lipp, she published a work in 1891 dedicated to George Sand, l'Eternel Roman.

She died in 1909 at the Clarens, Switzerland home of her brother-in-law, the painter Odilon Redon.[3][4]