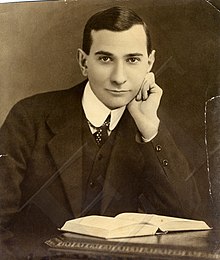 Joseph Fynney (1876 - 15 April 1912) was a RMS Titanic victim. It has been suggested that, with travel partner William Alfred Gaskell, he was one of the gay passengers aboard the Titanic.[1]

Fynney did not married and people reported that Fynney took great interest in helping the young men circling around him, and his neighbours complained about the late-night visits of these young men. He volunteered at the local church, St. James, Toxteth, helping young delinquents. A handsome bachelor, Fynney always brought a young man with him while vising his mother in Canada, where the woman had moved to be near her daughter.[3]

Finney boarded the Titanic at Southampton as a second class passenger; travelling with him, on the same ticket, was William Alfred Gaskell. Also this time, the purpose of the travel was to visit Fynney's family in Montréal, Québec.[2] They both died in the sinking.[4] Fynney's body was recovered and his family buried him in Montreal, at the Mount Royal cemetery.[2] He has also a memorial at his father's grave in Liverpool Cemetery, Anfield.[2]