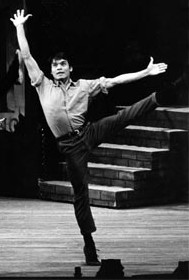 José De Vega, Jr. (January 4, 1934 - April 8, 1990) was an actor and choreographer who worked with the organization Great Leap to stamp out ethnic stereotypes in movies and television.

Born Jan. 4, 1934, in San Diego to a Filipino father and Colombian mother, De Vega began his career as the character Chino in the Broadway and film versions of "West Side Story."

De Vega choreographed, directed and performed in concerts and productions of Great Leap, a Los Angeles group of Asian-American artists working to end entertainment stereotypes. He sang in the group's "Talk Story" at the Los Angeles Theater Center.

He appeared in the film "Blue Hawaii" and in the television series "Bonanza," "Dynasty," "Mission Impossible" and "Hart to Hart."

He died of AIDS at Veterans Memorial Hospital in Westwood. He was 56.