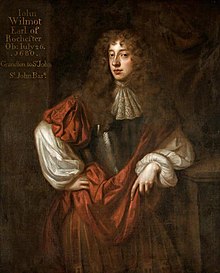 John Wilmot (1 April 1647 – 26 July 1680) was an English poet and courtier of King Charles II's Restoration court. The Restoration reacted against the "spiritual authoritarianism" of the Puritan era.[3] Rochester was the embodiment of the new era, and he is as well known for his rakish lifestyle as his poetry, although the two were often interlinked.[3] He died at the age of 33 from venereal disease. The comment of John Wilmot, earl of Rochester, “missing my whore, I bugger my page,” captures the interchangeability of partners from the perspective of the penetrator.

The poet of Restoration London was undoubtedly John Wilmot, Earl of Rochester, who led a profane and reckless career at court under the usually benevolent eye of the king. Rochester knew all the vices of London, and could begin with the trees and bushes of St James’s Park: ‘And nightly now beneath their shade / Are buggeries, rapes and incests made.’ He sent his French page to a close friend, Henry Savile, with the message that ‘the greatest and gravest of this court of both sexes have tasted his beauties’. Rochester is also presumed to be the author of a fantastical farce entitled Sodom, or the Quintessence of Debauchery (1684) in which the king of Sodom issues a proclamation in favour of sodomy: I do proclaim that bugg’ry may be us’d Through all the land, so cunt be not abus’d … To Buggeranthus let this charge be given, And let them bugger all things under heaven. Rochester became a little more serious in his tragedy Valentinian (1685), where the emperor tells the eunuch: Oh let me press these balmy lips all day, And bathe my love-scorched soul in thy moist kisses.

Rochester's contemporary Andrew Marvell described him as "the best English satirist," and he is generally considered to be the most considerable poet and the most learned among the Restoration wits.[4] His poetry, despite being widely censored during the Victorian era, enjoyed a revival from the 1920s onwards, with notable champions including Graham Greene and Ezra Pound.[5] The critic Vivian de Sola Pinto linked Rochester's libertinism to Hobbesian materialism.[5] During his lifetime, he was best known for A Satyr Against Reason and Mankind, and it remains among his best known works today.

By the age of 33, Rochester was dying, from what is usually described as the effects of syphilis, gonorrhea, or other venereal diseases, combined with the effects of alcoholism. Carol Richards has disputed this, arguing that it is more likely that he died of renal failure due to chronic nephritis as a result of suffering from Bright's disease.[25] His mother had him attended in his final weeks by her religious associates, particularly Gilbert Burnet, later Bishop of Salisbury.

After hearing of Burnet's departure from his side, Rochester muttered his last words: "Has my friend left me? then I shall die shortly." In the early morning of 26 July 1680, Rochester died "without a shudder or a sound".[26] He was buried at Spelsbury church in Oxfordshire.

A deathbed renunciation of libertinism and conversion to Anglican Christianity, Some Passages of the Life and Death of the Honourable John Wilmot Earl of Rochester, was published by Reverend Burnet.[27] Because this account appears in Burnet's own writings, its accuracy has been disputed by some scholars, who accuse Burnet with having shaped the account of Rochester's denunciation of libertinism to enhance his own reputation. On the other hand Graham Greene, in his biography of Wilmot, calls Burnet's book "convincing". [28]