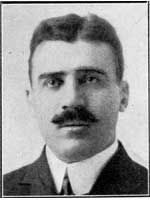 John Hugo Ross (November 24, 1875 - April 15, 1912) was a RMS Titanic victim. It has been suggested that, with travel companions Thomas Francis McCaffry and Thomson Beattie, he was one of the gay passengers aboard the Titanic.

John Hugo Ross was born in Glengarry Co., Ontario, on November 24, 1875, the son of Arthur Wellington Ross, a Canadian politician, educator and lawyer, and Jessie Flora Cattanach. The family moved to Winnipeg, Manitoba, when he was two years old.[1]

In the 1880s he worked for the lieutenant-governor of Manitoba, James Coolbrook Patterson. He then moved to Toronto to become a mining broker. From 1893 to 1895 he was junior partner with A. W. Ross & Co. and in 1895 partner in Fox & Ross of Toronto. In 1894 in Winnipeg he founded the Hugo Ross Realty Company Ltd.[2] When his father died in 1901, he inherited the family fortune and moved back to Winnipeg.[1] In 1903 he founded the Winnipeg Real Estate Board.[2]

Ross met Thomson Beattie in Winnipeg, they had offices in the same building.[1] In 1912, Beattie, McCaffrey and Ross left aboard the Franconia for a 4 months long tour to Middle East and Europe.[3] In February they were in Cairo and visited Luxor and Aswan. After Cairo they landed in Naples and Venice. Due to the fact Ross was ill from dysentry, they decided to come back early and changed their tickets. They boarded the Titanic as first class passengers in Cherbourg. When the ship struck the iceberg, Ross, still ill, refused to leave his room. He most likely drowned in his bed.[1] His body was not recovered and his family put a memorial to him at Mount Pleasant Cemetery in Toronto.[2]

It has been suggested that Beattie and McCaffrey were a couple and Ross was gay as well.[4]

John Hugo Ross gave his name to Hugo Street in Fort Rouge, Winnipeg, some years before his death.[1]

There is a memorial plaque with his name, and the other victims from Winnipeg (Mark Fortune; Thompson Beattie; Charles A. Fortune; George E. Graham; and J. J. Borebank), in the Winnipeg City Hall.[1]