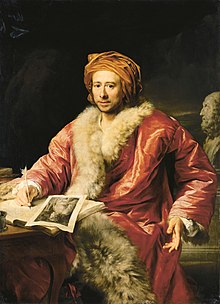 Johann Joachim Winckelmann (9 December 1717 – 8 June 1768) was a German art historian and archaeologist.[3] He was a pioneering Hellenist who first articulated the difference between Greek, Greco-Roman and Roman art. "The prophet and founding hero of modern archaeology",[4] Winckelmann was one of the founders of scientific archaeology and first applied the categories of style on a large, systematic basis to the history of art. Many consider him the father of the discipline of art history.[5] He was one of the first to separate Greek Art into periods, and time classifications.[6] His would be the decisive influence on the rise of the neoclassical movement during the late 18th century. His writings influenced not only a new science of archaeology and art history but Western painting, sculpture, literature and even philosophy. Winckelmann's History of Ancient Art (1764) was one of the first books written in German to become a classic of European literature. His subsequent influence on Lessing, Herder, Goethe, Hölderlin, Heine, Nietzsche, George, and Spengler has been provocatively called "the Tyranny of Greece over Germany."[7]

Today, Humboldt University of Berlin's Winckelmann Institute is dedicated to the study of classical archaeology.

Winckelmann was homosexual, and open homoeroticism informed his writings on aesthetics. This was recognized by his contemporaries, such as Goethe.[8] Johann Joachim Winckelmann, whose studies of Greek art inspired the Classical revival, was commonly thought to have practised what he preached. As Walter Pater wrote in 1867 with unusual directness (for him): That his affinity with Hellenism was not merely intellectual, [. . .] is proved by his romantic, fervid friendships with young men. He has known, he says, many young men more beautiful than Guido’s archangel. These friendships, bringing him in contact with the pride of human form, and staining his thoughts with its bloom, perfected his reconciliation with the spirit of Greek sculpture. Winckelmann himself insisted that the glories of classical art would remain a mystery to ‘those who are observant of beauty only in women, and are moved little or not at all by the beauty of men’. Casanova claimed to have seen him putting the idea into practice. Early one morning in Rome, he walked in on a trouserless Winckelmann lying on top of a beautiful boy. While pulling up his pants, the intrepid scholar explained that he was conducting an experiment: he was trying to enter the minds of his ancient heroes.

As a young man of 23 Winckelmann had shared a room with his pupil, Peter Lamprecht, with whom he had fallen in love: no response. Then there had ben a von Bulow, who also plunged Winckelmann into despair. In Rome he fell for a young Baltic baron, Friedrich von Berg, to who he quoted (in vain) Cowley's "Ode on Platonick Love." Neither Lamprecht nor von Berg had the capacity to respond. The one became a dull civil servant, the other a dull country squire: neither of them would ever have been heard of, except that a man of genius once fell for their looks when they were young. In Rome he had an affair with Mengs's pupil, Franz Stander, along with a young Florentine, Niccolò Castellani.

In Rome he enjoyed the society of cognoscenti. He was a friend of the fashionable painter Mengs, who did a portrait of him - one remarks the luminous intelligent eyes. He met the English dilettanti, the visiting dukes, Sir Horace Mann, the connoisseur Sir William Hamilton, Boswell and Robert Adam; he knew the naughty Wikes, of the "Essay on Women".

In 1768, Winckelmann was stabbed and strangled in a tavern in Trieste by a man called Arcangeli. His scandalous death was thought to have lifted the veil on his sordid dealings with the homosexual underworlds of Europe. Arcangeli was an uneducated man and their liaison had clearly not been intellectual. After reports in all the European papers, Winckelmann’s propensity was widely (though not universally) known, and yet his reputation survived and was even enhanced.

His private letters began to appear shortly after his death and showed that ‘Greek love’ was not an ancient curio: it was a living tradition. Winckelmann had been cautious but not obscure: I am thinking of going to Naples on the 20th [. . .] How happy I should be to have you by my side! You rise with me and you sleep with me! You are the dream of my night. [. . .] I kiss your picture and I swoon. From the moment I first saw you, an incomprehensible attraction, aroused not only by your form and features, gave me an inkling of that harmony that passes human understanding. [. . .] Love at its strongest must express itself in whatever way it can. I Thee, both as a man and woman, prize; For a perfect Love implies Love in all Capacities. (Abraham Cowley, ‘Platonick Love’)

Goethe’s edition of these extraordinary love letters appeared in 1805. In the accompanying essay, Winckelmann und sein Jahrhundert, he portrayed him as ‘a complete man’ whose quest for beauty had been fuelled by every aspect of his social, intellectual and emotional life: If the demands of friendship and beauty both find sustenance at the same time in a single object, the man’s happiness and gratitude seem to exceed all bounds. [. . .] Thus we often find Winckelmann associating with beautiful young men, and never does he appear more animated and amiable than in often fleeting moments.