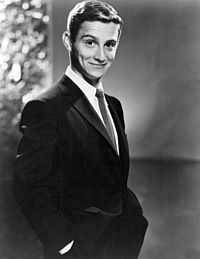 Joel Grey (born Joel David Katz; April 11, 1932) is an American actor, singer, dancer, and photographer. He is best known for portraying the Master of Ceremonies in both the stage and film versions of the Kander & Fred Ebb musical Cabaret. He has won an Academy Award, Tony Award, and Golden Globe Award.

He also originated the role of George M. Cohan in the musical George M! in 1968, and the Wizard of Oz in the musical Wicked. He also starred as Moonface Martin in the Broadway revivals of Anything Goes and as Amos Hart in Chicago.

In 1958, Grey married Jo Wilder; they divorced in 1982. Together, they had two children: actress Jennifer (star of the film Dirty Dancing directed by Emile Ardolino) and chef James.[1][23]

In January 2015, Grey discussed his sexuality in an interview with People, stating: "I don't like labels, but if you have to put a label on it, I'm a gay man."[28] Grey writes about his family, his acting career, and the challenges of being gay in his 2016 memoir, Master of Ceremonies.[29]

Both his houses in Los Angeles, Brentwood and Venice, were designed by his friend, architect Franklin D. Israel.