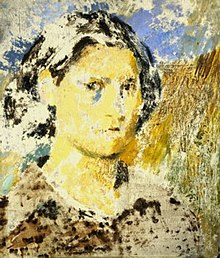 Joan Kathleen Harding Eardley (18 May 1921 – 16 August 1963) was a British artist noted for her portraiture of street children in Glasgow and for her landscapes of the fishing village of Catterline and surroundings on the North-East coast of Scotland. One of Scotland's most enduringly popular artists, her career was cut short by breast cancer.[1] Her artistic career had three distinct phases.[2] The first was from 1940 when she enrolled at the Glasgow School of Art through to 1949 when she had a successful exhibition of paintings created while travelling in Italy. From 1950 to 1957, Eardley's work focused on the city of Glasgow and in particular the slum area of Townhead. In the late 1950s, while still living in Glasgow, she spent much time in Catterline before moving there permanently in 1961. During the last years of her life, seascapes and landscapes painted in and around Catterline dominated her output.[2]

In the spring of 1950, while convalescing from mumps, Eardley was taken by a friend, Annette Soper, (later Annette Stephen by marriage), to visit Catterline, a fishing village near Stonehaven, south of Aberdeen, where Eardley had an exhibition at the time.[23] Eardley started to spend part of each year away from Glasgow in Catterline, until 1961 when the small village became her permanent home.[2] At first Eardley worked from Watch House, a former Coast-guard property which Soper had bought and allowed Eardley the free run of.[23] In 1955 Eardley bought Number 1, The Row, a cottage on the cliff edge which she used as a home and studio until 1955 when she bought Number 18, The Row, while retaining Number 1, The Row as her picture store.[2] Number 18 was more suitable for living in, but was still a very basic cottage without electricity, running water or sanitation.

At Catterline Eardley produced seascapes, often showing the same view but in different light and weather conditions.[15] She also painted landscapes showing the changing seasons in the fields around the village, her thickly textured paintwork sometimes incorporating real pieces of vegetation.[24] To Summer Fields (c.1961) Eardley added grass pieces to the paint surface while Harvest (1960-61) includes elements of grit.[25][26] She usually worked outdoors and often in poor weather, sometimes in snowstorms or gale force winds.[5][10] The Wave from February 1961, for example, was painted entirely in the open air and was one of four paintings she created during a particular storm, the state of the tides determining which of the four she would work on at any given time.[27] When she heard of a storm approaching the coast, Eardley would travel by train from Glasgow to Stonehaven and then ride her Lambretta to Catterline.[10] For her seascapes Eardley switched from painting on canvas to using large boards, for a more rigid surface to work on, some of which were as large as six feet in length.[10]

In an audio recording Eardley spoke of Catterline: "When I'm painting in the North East, I hardly ever move out of the village (Catterline), I hardly ever move from one spot. I do feel the more you know something, the more you can get out of it. That is the North East. It's just vast (indistinct word possibly "waves"), vast seas, vast areas of cliff. Well you've just got to paint it."[28][29]

In 1955 Eardley became an associate of the Royal Scottish Academy and in 1963 she was elected a full member of the academy. The same year an exhibition of her work was held in London, but she was too ill to attend.[5]

In 2013, a collection of letters written by Eardley to Audrey Walker were released, having been placed under an embargo by Walker until decades after she had died. Eardley had first met Walker, who was ten years older than her and was married to a prominent Scottish barrister, in 1952 in Glasgow.[30] When the two were not together, Eardley would write to Walker on a near daily basis and the letters show Eardleys' intense love for Walker.[31] Although the letters were released with the agreement of both the Eardley and Walker family estates, their publication was criticized in some quarters.[32]

Early in 1963, Eardley consulted a homeopathic doctor about a breast lump but was told she had no need to be concerned.[12] By May 1963, she was complaining of persistent headaches and was diagnosed with breast cancer which had spread to her brain. Eardley was cared for by friends at Catterline throughout her last months and died at Killearn Hospital in August 1963 at the age of 42, with her mother, sister and Audrey Walker at her bedside.[21] Her ashes were scattered on Catterline beach.[15][1]