Ruth Seid (July 1, 1913 – April 4, 1995) was an American novelist who wrote under the pen name Jo Sinclair. She earned awards and critical praise for her novels about race relations and the struggles of immigrant families in America.

The fifth child and third daughter of Jewish immigrants, Ruth Seid was born in Brooklyn, New York on July 1, 1913, the daughter of Nathan Seid and Ida Kravetsky. In an effort to escape the blinding poverty in which they lived, the Seid family moved to Cleveland, Ohio in 1916, but her parents were unable to find the prosperity they sought. After attending local public elementary schools, she enrolled at John Hay High School, where she concentrated on studies in English and journalism. After graduating at 17 as the class valedictorian, Seid found employment as a clerk-typist and began attending night classes at Cleveland College. With the onset of the Great Depression, however, she was soon unemployed and she and her family sought public assistance. Sinclair worked in a factory and on a project for the Works Progress Administration (WPA); she served as assistant publicity director for the Cleveland American Red Cross; and she was an editor, secretary, and saleswoman. Seid spent five years working for the WPA, writing, editing and doing historical research on areas of interest in Ohio. She eventually became an editor on the Foreign Language Newspaper Digest. The WPA was one of the most important accomplishments of the Emergency Relief Appropriation Act of 1935—part of President Franklin Delano Roosevelt's "New Deal." This government office hired unemployed Americans to work on various government projects. Many of these projects were similar to ones sponsored by the Public Works Administration.

Seid was best known for the novel, Wasteland, her first, which was seized from among 700 entries as ther prestigious $10,000 Harper Prize Novel for 1946. 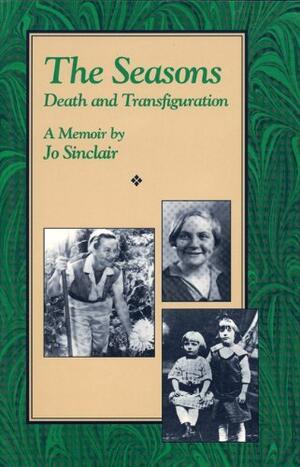 Her first published novel, Wasteland (1946), is a landmark both of Jewish-American literature and LGBTQ literature. In The Wasteland, there is a lesbian circle including a black woman whom character, while not well developed, shows the oppression of black women. The novel focuses on Jake Braunowitz (who also goes by John Brown), an American Jew struggling with his Jewish identity, and his sister Debby, who is both a committed Jew and a lesbian, although she never uses that word for herself — the closest Debby comes to naming herself is when when she tells Jake, “the odd ones, the queer and different ones. They were people. I was people… I was them.” Jonathan Ned Katz described Debby as “probably the most complex, human, and affirmative portrait of a homosexual (male or female) to appear in American fiction” until the 1960s.

Other works were Sing at My Wake (1951), The Changelings (1955), and Anna Teller (1960). "The Changelings" dealt with racial tensions in a changing city neighborhood and the friendship between two teen-age girls, one black, one white. Her books have been translated into six languages. Many of her short stories for magazines have been anthologized, for example in 1990 in America and I: Short Stories by American Jewish Women Writers. While her first novel was greeted with acclaim, subsequent works were not as highly praised or as widely critiqued.

Seid herself was generally quiet about her lesbian identity, although she did discuss it more freely in letters from the 1980s and 1990s. She published a memoir in 1993, The Seasons: Death and Transfiguration, and spent her last years with her partner, Joan Soffer, in Pennsylvania. Soffer first wrote a fan letter to Sinclair after she had read Wasteland. Reid arrived in Jenkintown from Novelty, Ohio, in 1974. Her hobby was gardening, which she continued to enjoy till her death.

She died on April 4, 1995, at her home in Jenkintown, Pa. She was 81. The cause was cancer, said Joan Soffer, her companion. She was survived by Joan Soffer, with whom she lived for more than 20 years.