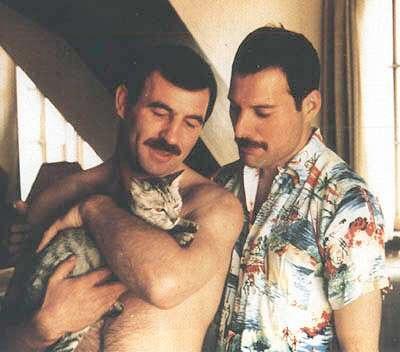 Seamus "Jim" Hutton (January 4, 1949 – January 1, 2010) was Freddie Mercury's last partner. He died on New Year’s Day 2010 from a smoking related illness at sixty years old. Although he had AIDS, Hutton did not pass away from AIDS related complications.

Jim and Freddie met at a club in 1984 when Mercury offered to buy him a drink and Hutton politely turned him down. He says he didn’t recognize Freddie but a few months later while at a restaurant his friend told him, “Hey, Freddie Mercury is behind you.”

Jim this time accepted Mercury’s drink and the two talked for a while but nothing transpired. About eighteen months later, the two happened to meet again at the same club. Freddie once again bought Jim a drink and this time they got together.

Jim was hired as Mercury’s hairdresser and ended up moving in with Freddie at his Garden Lodge home about two years later.

When Freddie was diagnosed with AIDS in 1987, he told Jim he would understand if he left. Jim recalls telling him, “I love you, Freddie – I’m not going anywhere.”

Hutton himself tested positive for HIV in 1990 but he didn’t tell Mercury about the results for nearly a year. Jim nursed and cared for Freddie and was there by his side when he took his last breath on November 24, 1991.

Upon his death, Mercury left Hutton £500,000 as well as a plot of land at Rutland Terrace, Carlow where Hutton built a house. He published a book in 1994, 'Mercury and Me'. He died and was buried in his native Ireland.