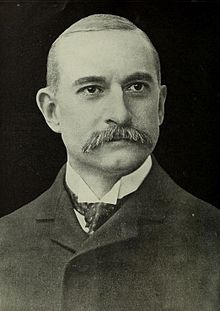 James Jewett Stillman (June 9, 1850 – March 15, 1918) was an American businessman who invested in land, banking, and railroads in New York, Texas, and Mexico. He was chairman of the board of directors of the National City Bank.[2] He forged alliances with the Rockefeller family, Standard Oil and Kuhn, Loeb & Co. to lay a foundation that made it, arguably, "the greatest bank in the Western Hemisphere." [3] He engaged in an expansion policy that made National City the largest bank in the United States by 1894, the first to open foreign branches, and a leader in foreign exchange.[4] By 1902, the bank was able to pay any sum of money to any city in the world within 24 hours.[5] He was worth approximately $77 million at the time of his death in 1909, making him one of the wealthiest people in the country at the time.

Stillman was born on June 9, 1850 to Charles Stillman (1810–1875) and Elizabeth Pamela Goodrich in Brownsville, Texas, a town founded by his father. Both of his parents were born in Wethersfield, Connecticut. Charles Stillman had significant business interests which James acquired in 1872. He expanded those to control of sixteen Texas banks and a significant land holdings in the Rio Grande Valley, particularly Corpus Christi and Kerrville, Texas.[6]

In 1876, Stillman supported Porfirio Díaz's overthrow of the government of Mexico by the Revolution of Tuxtepec.

He was chairman of the board of directors of the National City Bank and retired in 1908.[2]

Stillman was an intimate friends of James O. Bloss and John William Sterling. After the death of James Gordon Bennett Jr. it was learned by the administrators of his estate that he had appointed Stillman one of the administrators and trustees. Stillman had little or no opportunity to act under the authority of Bennett's will, as he died a few weeks after Bennett's death. Stillman named Sterling one of his executors. Sterling could hardly have begun his duties under Stillman's will when he too died suddenly. The Bennett estate, the Stillman estate and the Sterling estate totaled about $76,000,000. After Sterling's death it was learned that he had appointed his long time intimate companion, Bloss, one of the executors. And a few weeks after Sterling's death, Bloss died.[13]

In 1928, the C.O. Stillman was named in his honor. At the time, it was the largest oil tanker in the World.[16] Stillman is considered to have been one of the 100 wealthiest Americans, having left an enormous fortune.[1]