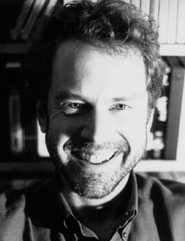 James Robert Baker (October 18, 1947 – November 5, 1997) was an American author of sharply satirical, predominantly gay-themed transgressional fiction. A native Californian, his work is set almost entirely in Southern California. After graduating from UCLA, he began his career as a screenwriter, but became disillusioned and started writing novels instead. Though he garnered fame for his books Fuel-Injected Dreams and Boy Wonder, after the controversy surrounding publication of his novel, Tim and Pete, he faced increasing difficulty having his work published. According to his life partner, Ron Robertson, this was a contributing factor in his death by suicide.

Baker's work has achieved cult status in the years since his death, and two additional novels have been posthumously published. First-edition copies of his earlier works have become collector's items. His novel Testosterone was adapted to a film of the same name, though it was not a financial success. Two other books have been optioned for films, but they have not been produced.

Baker was born in Long Beach, California and raised in what he considered a "stifling, Republican Southern Californian household".[1] Rebelling against his parents, he became attracted to the fringe elements of society, including beatniks (anyone living as a bohemian, acting rebelliously, or appearing to advocate a revolution in manners), artists and gays.[1][2] In high school during the 1960s he explored his sexuality at underground gay teen nightclubs, while living in fear that his abusive father would find out. At one point, his father hired a private detective to follow him, when he suspected Baker was having an affair with a male neighbor.[3] This family dynamic would be used in many of his novels, most extensively in Boy Wonder.

Baker began taking drugs, and became, in his own words, "an out of control, teenage speed freak".[3] He also began drinking heavily, attributing it to the fact that he was closeted. However, even after coming out, his substance abuse remained excessive and "still had a life of its own".[3] After sobering up, he attended UCLA film school, where he was one of the winners of the Samuel Goldwyn Writing Awards,[4] and directed two films: Mouse Klub Konfidential and Blonde Death. Mouse Klub Konfidential, a film about a Mickey Mouse Club Mouseketeer who becomes a gay bondage pornographer, was a controversial entry in the 1976 San Francisco's LGBT Film Festival, as some thought Baker was actually advocating Nazism.[5] It is also credited with having caused Michael Medved to abandon his dream of film making and instead become a film critic.[1][6]

Baker's lifelong ambition was to write. Upon graduating from UCLA, he spent approximately five years writing Hollywood screenplays in the early 1980s, a process he hated. While financially successful, he was frustrated that his work was not being produced. "I felt like a door-to-door salesman going to all these [story] pitch meetings ... [filled with] rabid, hideous morons".[3] He became discouraged and disillusioned, and turned his attention to novels.

His first book, Adrenaline, was published under the pseudonym James Dillinger. A story of two gay fugitive lovers on the run, it presaged the satire and drug fueled violence so prominent in his later books. Here Baker began developing the themes that dominated his following works: anarchy; angry and somewhat paranoid gay men; the dark underside of Los Angeles, juxtaposed with its sunny outward image; the hypocrisy of organized religion; anonymous sex and its implications in the age of AIDS; and homophobia and the oppression of gays in a Republican dominated America.[7][8] Its plot device of underdog characters forced into flight due to circumstances beyond their control was one Baker explored in all of his subsequent work. The modest success of this novel encouraged him to devote himself to what have become his best known works, Fuel-Injected Dreams (a novel revolving around a character loosely based on record producer Phil Spector)[3] and the 1986 release Boy Wonder. After the novel was published, he stopped screenwriting in order to solely concentrate on books. He spent the bulk of each day writing and researching, and acted out characters and scenes of his novels on videotape to perfect the dialogue.[1]

His primary focus was gay-themed writing, though he also wrote about the entertainment industry. Mostly satirical, his writing was filled with increasingly clear anger and disdain for the Republican neo-con agenda, especially after the AIDS pandemic began to take a large toll on the gay community.[3] A very strong voice in gay literature, Baker had admirers and detractors for his gay radical stance, both in the mainstream literary community as well as the gay community itself.[9]

A self-described anarchist, Baker has been categorized as a writer of transgressional fiction, in that his novels are frequently populated by sociopathic, nihilistic characters who engage in taboo behaviors such as heavy drug use, incest, necrophilia and other practices; and often commit acts of extreme, surrealistic violence.[5][10] A man of eclectic tastes, Baker cited as literary influences writers and film directors ranging from Proust to Jim Thompson and Sam Peckinpah. He also admired the punk writer Dennis Cooper.[10]

His work is filled with pop cultural references to both film and music, as well as politics. Orson Welles' Touch of Evil and John Ford's The Searchers are mentioned prominently in more than one of his books, and Roxy Music is referenced in virtually every novel he wrote. The imagery in his novels is largely cinematic, with expressions such as "fade in/fade out", "quick cut" and "VistaVision"; and sentences such as "a montage traces the next fifteen years" and "If the last reel of Cheryl's life had been a CinemaScope Technicolor movie ...".[11] With driven narratives, his books have the feel of a movie set down on paper.

After the reception of Tim and Pete, with several critics calling him "The Last Angry Gay Man", Baker faced increasing difficulty finding a publisher for his work and his financial position became precarious.[14][19][20] He was only able to publish one novella, Right Wing, and that was self-published on the Internet.[1]

Baker's life partner, Ron Robertson, believes that this difficulty led Baker on a quick, downwards emotional spiral.[1] Baker killed himself at his home on November 5, 1997, by asphyxiation in his garage.[4] His death was noted in literary circles and mainstream press; the Gay Times in the United Kingdom wrote, "Baker's suicide is particularly tragic because it robs American gay writing of a refreshingly distinctive voice quite unlike the po-faced prose of so many of his contemporaries."[21]