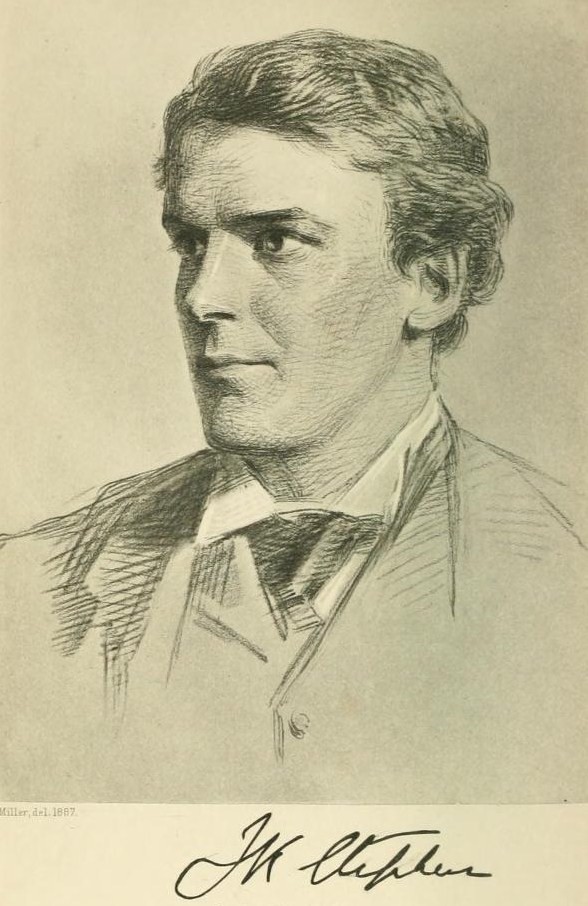 James Kenneth Stephen (25 February 1859 – 3 February 1892) was an English poet, and tutor to Prince Albert Victor, eldest son of Albert Edward, Prince of Wales. He was a Cambridge Apostles.

James Kenneth Stephen was the second son of Sir James Fitzjames Stephen, barrister-at-law, and his wife Mary Richenda Cunningham. Known as 'Jem' among his family and close friends, he was first cousin to Virginia Woolf (née Stephen), and shared with his cousin symptoms of bipolar disorder that would afflict him increasingly in later life.

As a youth attending Eton College as a King's Scholar, Stephen's prodigious size and physical strength helped him prove himself an outstanding player of the Eton Wall Game, representing the Collegers (King's Scholars) on St. Andrew's Day from 1874 to 1877 and leading the team to victory as Keeper of the College Wall in his final two years. He has been commemorated in a toast raised by College Wall on the eve of St Andrew's Day every year for over a century: "In Piam Memoriam J.K.S."

Stephen developed a reputation as an intellectual, and it was said that he spoke in a pedantic, but highly articulate and entertaining manner. At King's College, Cambridge, again as a King's Scholar, he continued a flourishing academic career: he was a member of the Apostles intellectual society, and President of the Cambridge Union Society in the Michaelmas term of 1880, and was made a Fellow of King's College in 1885.[1]

In 1883, Stephen was chosen as the tutor and companion of Prince Albert Victor, Duke of Clarence and Avondale (nicknamed Eddy), the son of the Prince of Wales,[2] and was expected to help raise the prince's poor academic standing before he attended Trinity College, Cambridge.[3] Stephen was initially optimistic about tutoring the prince, but by the time the party were to move to Cambridge he had concluded, "I do not think he can possibly derive much benefit from attending lectures at Cambridge ... He hardly knows the meaning of the words to read".[4]

Some biographers have suggested Stephen was emotionally attached to Albert Victor, but whether or not his feelings were overtly homosexual is open to question.[5] In 1972, writer Michael Harrison claimed that a sexual relationship began between tutor and pupil, ending when Prince Eddy was gazetted to the 10th Hussars on 17 June 1885, and resulted in a scandal of which, apparently, little evidence remains.[6][7]

Stephen suffered a serious head injury in an accident in the winter of 1886 or 1887, which may have exacerbated the bipolar disorder from which he suffered, a condition also found in his cousin, Virginia Woolf.[8] Separate descriptions of the accident exist. Virginia Woolf's biographer, Quentin Bell, says that the family tradition was that Stephen was struck in the head by some object from a moving train. Others claim that Stephen was injured when a horse he was riding shied and backed him into the moving vane of a windmill.[9]

While Stephen originally appeared to have made a complete recovery, it was later discovered that his brain had been permanently damaged and his behaviour became increasingly erratic. Bell relates incidents of Stephen plunging the blade from a sword stick into bread; becoming deluded that he was a painter of great genius; rushing about dangerously in a hansom cab; and "'on another occasion he appeared at breakfast and announced, as though it were an amusing incident, that the doctors had told him that he would either die or go completely mad.'"[10] Stephen became a patient of physician Sir William Gull, but his rapid mental and physical decline saw him drift from one project to the next with little focus or interest – outside of completing two volumes of poetry – before he was finally committed to a mental asylum.

In 1891, Stephen was committed to St Andrew's Hospital, a mental asylum in Northampton.[15] In January 1892 the former royal tutor heard that his erstwhile pupil, the 28-year-old Prince Albert Victor, Duke of Clarence, a man destined to be king one day, had died of pneumonia at Sandringham, after contracting influenza. On hearing the news, Stephen refused to eat, and he died twenty days later, aged 32. The cause of death, according to the death certificate, was mania.[16]

Stephen's outstanding record in the Eton Wall Game has become part of school legend: unverified accounts suggest that in his final year, he held up the whole of the opposing team single handed for five minutes until the rest of College Wall made it to the furrow. Ever after, the King's Scholars of Eton College have honoured his memory with a toast at the Christmas Sock Supper and other festive occasions - in piam memoriam J.K.S. - "to the pious memory of James Kenneth Stephen".

Stephen was recalled in less pious memory in a play by former Eton housemaster and Old Etonian, Angus Graham-Campbell: entitled Sympathy for the Devil, it premiered at the Eton Drama Festival in 1993 and was based on the notion that Stephen could have been one of the Jack the Ripper suspects.

Renewed interest in the 1888 Whitechapel murders had exploded in 1970 when British physician Thomas E. A. Stowell, allegedly working from the papers of Sir William Gull, made the veiled suggestion that Stephen's former pupil Prince Albert Victor, named only as "S", was the culprit.[17] In 1972, writer Michael Harrison, working from this sensational theory, had come to the conclusion that "S" was not the prince, but actually Stephen who was committing the murders "out of a twisted desire for revenge" because of the dissolution of an alleged homosexual relationship between the two. Harrison contends that the breakup of the relationship with Eddy, combined with his mental decline, provoked Stephen to act out his own poem "Air: Kaphoozelum" in which the protagonist kills ten harlots.[18]

Forensic psychiatrist David Abrahamsen identified Stephen as matching his psychological profile of Jack The Ripper, claiming that Prince Eddy was an accomplice in his crimes and that the two enjoyed a mutually dependent relationship, with Stephen as the dominant partner.[19]

This and similar theories have been dismissed on a number of counts, with some citing that Stephen would have been unable to commit any murders in London and return to Cambridge in time for lectures the following morning.[20] Harrison had also connected Stephen's handwriting with the Ripper letters "From Hell" and "Dear Boss", and that the internal style of some of Stephen's poems matches some of the anonymous Ripper letters. This connection was rebutted by Thomas J. Mann in an article in the Journal of the World Association of Document Examiners (June 1975) in which Mann determines that only the Lusk letter is likely to be genuine and that the connection between Stephen's handwriting and that letter was minimal: "The overwhelming evidence is that the two do not match; and if the author of the Lusk letter was indeed Jack the Ripper, then J.K. Stephen was not that man."[21]

Despite this, Stephen, Eddy and their mutual doctor Sir William Gull have been inextricably linked in the public imagination to these unsolved crimes.