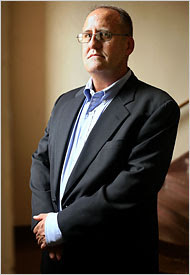 John Michael Bailey (born July 2, 1957) is an American psychologist and professor at Northwestern University. He is best known among scientists for his work on the etiology of sexual orientation, from which he concluded that homosexuality is substantially inherited.[1][2][3] He also wrote The Man Who Would Be Queen, which has elicited reactions ranging from strong criticism to a nomination for an award, later retracted,[4] from the Lambda Literary Foundation, an organization that promotes gay literature. According to the Web of Science, Bailey's works have been cited nearly 2200 times and he has an h-index of 25.[5]

Another line of Bailey's research has concerned the ways that homosexuals are sex-atypical (or gender nonconforming) compared with heterosexuals, as well as the ways that homosexuals are sex-typical and gender conforming. For example, he published a meta-analysis showing that on average, homosexual men and women recall being much more gender nonconforming children, compared with heterosexual children.[13] In contrast, he also showed that for many traits related to mating (such as interest in casual sex, and emphasis on a partner's physical attractiveness), homosexuals appear to be similar to heterosexuals of their own sex.[14] Recently, he has researched the gaydar phenomenon.[15]

Bailey has been interested in the evolutionary paradox of the persistence of homosexuality. "Male homosexuality is evolutionarily maladaptive," he told The New York Times which also noted that Bailey intended "that the phrase means only that genes favoring homosexuality cannot be favored by evolution if fewer such genes reach the next generation."[16]

In an article coauthored with Aaron Greenberg, he suggested that allowing parents to choose the sexual orientation of their children is morally acceptable, provided the means used to accomplished that goal are themselves morally acceptable.[17] (For example, killing infants who will become homosexual would obviously be wrong. The acceptability of aborting "gay fetuses" or "straight fetuses" would depend on whether one believed that abortion, per se, is morally acceptable.) Alice Dreger criticized Greenberg's and Bailey's argument[18] and they responded.[19]