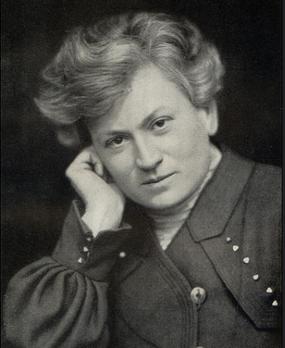 Ika Freudenberg (Friederike Freudenberg; 25 March 1858 in Rossbach in Neuwied – 9 January 1912 in Munich) was a leading protagonist of the women's movement in Bavaria.

Ika Freudenberg was the daughter of hotel owner Johann Philipp (1803-1890) and Caroline Freudenberg (1817-1893). Her mother came from a family of pastors.[1] In her youth she took music training, to become a professional musician.[2]

IIn 1894, Freudenberg moved with her first partner to Munich, where she began to get involved in the local women's movement. They made contact with writers such as Ricarda Huch, Gabriele Reuter and Lou Andreas-Salomé. They met the photographers and feminists Anita Augspurg and Sophia Goudstikker. She moved in with Goudstikker in 1899 after the death of her first partner. Their house at Queen Street was a popular meeting place for Munich Bohemians and for friends from the women's movement.

In 1896, Freudenberg took over the chair of an association founded two years earlier for women's interests (initially under the name of i>Society for Promotion of intellectual interests of women) and she held that office until her death in 1912.[3] Male members of the association included poet Rainer Maria Rilke and satirist Ernst von Wolzogen who in his satire The Third Sex (1899) immortalized the association and its members (including Freudenberg, the Goudstikker sisters, and Augspurg).

The association included information centers for women's occupations, professional organizations for women and a legal center for women. The latter was under the direction of Sophia Goudstikker.[4] Freudenberg and Chummy Gertrud Bäumer founded a professional association for waitresses who at that time had little labor protection.[5] Furthermore, Freudenberg served on the board of the Federation of German Women's Associations.

In 1905, Freudenberg was diagnosed with breast cancer. She was operated on several times.[6] On January 9, 1912 Ika Freudenberg died in Munich from cancer. The obituary for Goudstikker claimed, "Ika Freudenberg could not have devoted her energy to her high calling had not her friend prepared the carefree domestic life and the pleasant, comfortable environment that her intellectual production required. Sophia Goudstikker was a also an excellent housewife."

Freudenberg was described by contemporaries as having "prudent reasoning," a sense of humor, and a loving person.[7][8]

On 30 September 2004, a street was named after her in Munich, by decision of the City Council.