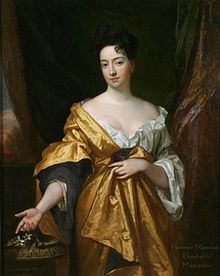 Hortense Mancini, Duchesse Mazarin (6 June 1646, Rome – 2 July 1699, Chelsea),[1] was the favourite niece of Cardinal Mazarin,[2] chief minister of France, and a mistress of Charles II, King of England, Scotland and Ireland. She was the fourth of the five famous Mancini sisters, who along with two of their female Martinozzi cousins, were known at the court of King Louis XIV of France as the Mazarinettes.

One of five sisters noted for their great beauty,[3] she was born Ortensia in Rome to Baron Lorenzo Mancini, an Italian aristocrat. After his death in 1650, her mother, Girolama Mazzarini, brought her daughters from Rome to Paris in the hope of using the influence of her brother, Cardinal Mazarin, to gain them advantageous marriages.[4] Hortense's four famous sisters were:

The Mancini also had three brothers: Paul, Philippe, and Alphonse.

Charles II of England, the first cousin of Louis XIV, proposed to Hortense in 1659, but his offer was rejected by Cardinal Mazarin who believed the exiled king to have little in the way of prospects. Mazarin realised his mistake when Charles was reinstated as King of England only months later. Mazarin then became the supplicant and offered a dowry of 5 million livres, but Charles refused. While a marriage did not materialise, the two were to cross paths later. Hortense's hand was also requested by Charles Emmanuel II, Duke of Savoy, another first cousin of Louis XIV, but arrangements fell through when Cardinal Mazarin refused to include the stronghold-castle of Pigneol in her dowry. For similar reasons, an offer made by the Duke of Lorraine was broken off as well.[5]

On 1 March 1661, fifteen-year-old Hortense was married to one of the richest men in Europe, Armand Charles de La Porte de La Meilleraye. Upon marriage to Hortense, he was granted the title of duc Mazarin.[4] On the death of Cardinal Mazarin soon after, he gained access to his wife's huge inheritance, which included the Palais Mazarin in Paris, home to many pieces of fine art.

The marriage was not a success. Hortense was young, bright, and popular; Armand-Charles was miserly and extremely jealous, not to mention mentally unstable. His strange behaviour included preventing milkmaids from going about their job (to his mind, the cows' udders had strong sexual connotations),[6] having all of his female servants' front teeth knocked out to prevent them from attracting male attention, and chipping off and painting over all the "dirty bits" in his fantastic art collection. He forbade his wife to keep company with other men, made midnight searches for hidden lovers, insisted she spend a quarter of her day at prayer, and forced her to leave Paris and move with him to the country.

It was at this point that Hortense began a love affair with the sixteen-year-old Marie-Sidonie de Lenoncourt, Marquise de Courcelles. In attempt to remedy his wife's 'immorality', her husband sent both girls to a convent. This tactic failed, as the two plagued the nuns with pranks: they added ink to the holy water, flooded the nuns' beds, and headed for freedom up the chimney. [4]

Despite their differences, Hortense and her husband had four children:

Leaving her small children behind, Hortense finally made a bid to escape from her hellish marriage on the night of 13 June 1668, with help from her brother, Philippe, Duc de Nevers, who procured horses and an escort to help her travel to Rome, where she counted on being able to take refuge with her sister Marie Mancini, now the Princess Colonna.

The French king Louis XIV declared himself her protector and granted an annual pension of 24 thousand livres. Her former suitor, Charles Emmanuel II, Duke of Savoy, also declared himself her protector. As a result, Hortense retired to Chambéry in Haute-Savoie and established her home as a meeting place for authors, philosophers, and artists. After the death of the duke, though, she was turned out by his widow, Marie Jeanne Baptiste of Savoy-Nemours, due to Hortense's romantic involvement with her husband.[4]

After the death of Savoy, Hortense had no source of income; her husband froze all of her income, including the pension from Louis XIV.

The English ambassador to France, Ralph Montagu, aware of Hortense's desperate situation, enlisted her help in increasing his own standing with Charles II. He hoped she would replace the king's current mistress, Louise de Kerouaille, Duchess of Portsmouth. Hortense was willing to try. In 1675, she travelled to London under the pretext of a visit to her young niece, Mary of Modena, the new wife of Charles II's younger brother, James, Duke of York. She was dressed as a man; her penchant for cross-dressing is thought to be an outward expression of her bisexuality.

By mid-1676, Hortense had fulfilled her purpose; she had taken the place of Louise de Kerouaille in Charles's affections.[7] He provided her a pension of £4,000, which considerably lightened her financial troubles.[8]

I went to see Madame de Portsmouth [Louise de Kerouaille]. She opened her heart to me… explained to me what grief the frequent visits of the King of England to Madame de Sussex [Hortense Mancini] cause her every day.

Such state of affairs might have continued had it not been for Hortense's promiscuity. She was dubbed as the 'Italian Whore' in England.[7] [9]

Firstly, there was her almost certainly sexual relationship with Anne Lennard, Countess of Sussex, the king's illegitimate daughter by the Duchess of Cleveland.[7] This culminated in a very public, friendly fencing match in St. James's Park, with the women clad in nightgowns, after which Anne's husband ordered his wife to the country. There she refused to do anything but lie in bed, repeatedly kissing a miniature of Hortense.

Secondly, she began an affair with Louis I de Grimaldi, Prince de Monaco. Charles remonstrated with her and cut off her pension, although within a couple of days he repented and restarted the payments. However, this signified the end of Hortense's position as the king's favourite. Though she and Charles remained friends, the Duchess of Portsmouth returned to her role as ’maitresse en titre’.[4]

The introduction to Aphra Behn's "The History of the Nun" has been taken as a suggestion that Behn too had romantic relations with Hortense during this same time. It reads:

to the Most Illustrious Princess, The Dutchess of Mazarine...how infinitely one of Your own Sex ador'd You, and that, among all the numerous Conquest, Your Grace has made over the Hearts of Men, Your Grace had not subdu'd a more intire Slave; I assure you, Madam, there is neither Compliment, nor Poetry, in this humble Declaration, but a Truth, which has cost me a great deal of Inquietude, for that Fortune has not set me in such a Station, as might justifie my Pretence to the honour and satisfaction of being ever near Your Grace, to view eternally that lovely Person, and here that surprising Wit; what can be more grateful to a Heart, than so great, and so agreeable, an Entertainment? And how few Objects are there, that can render it so entire a Pleasure, as at once to hear you speak, and to look upon your Beauty?

Hortense, however, maintained good relations with the king until his death. The Sunday before, the diarist John Evelyn wrote:

the King sitting and toying with his concubines, Portsmouth, Cleveland, and Mazarin [Hortense Mancini being the Duchesse Mazarin]... Six days after, all was in dust.

Following the death of Charles II, Hortense was well-provided for by James II, possibly because of her kinship with the new queen, Mary of Modena. Even when James fled England and William III and Mary II came to power, she remained in place, albeit with a much reduced pension.[4] During this time, she presided over a salon of intellectuals. Charles de Saint-Évremond, the great poet and epicurean, was a close friend and brought to her door all the learned men of London.

Evelyn recorded her eventual death in 1699:

June 11th, 1699. Now died the famous Duchess of Mazarin. She had been the richest lady in Europe; she was niece to Cardinal Mazarin, and was married to the richest subject in Europe, as was said; she was born at Rome, educated in France, and was an extraordinary beauty and wit, but dissolute, and impatient of matrimonial restraint, so as to be abandoned by her husband, and banished: when she came to England for shelter, lived on a pension given her here, and is reported to have hastened her death by intemperate drinking strong spirits. She has written her own story and adventures, and so has her other extravagant sister, wife to the noble family of Colonna.

With the exception of Marguerite de Valois, Hortense and her sister, Marie Mancini, were the first women in France to put their memoirs into print. Both women were partly motivated by the help that producing a body of evidence would bring to the cause of separation from their abusive husbands.

Hortense may have committed suicide.[4] Her husband managed to continue the drama after her death; he carted her body around with him on his travels in France, before finally allowing it to be interred by the tomb of her uncle, Cardinal Mazarin.

The only one of the de Nesle sisters not to become one of Louis XV's mistresses was the marquise de Flavacourt. Louise Julie was the first sister to attract the king followed by Pauline Félicité, but it was Marie Anne, the youngest and prettiest one, who was the most successful in manipulating him and becoming politically powerful.

Armande Félice also had an illegitimate daughter, Henriette de Bourbon (1725–1780), Mademoiselle de Verneuil, from her relationship with the duc de Bourbon, the chief minister of Louis XV from 1723 to 1726.