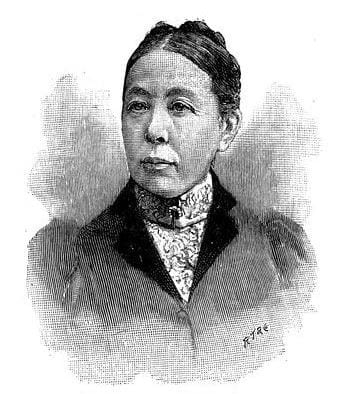 She was born on September 14, 1841, in Bromley-by-Bow, Middlesex (London), probably at Manor Field House, near Bromley Hall. She was baptized in St. Leonard’s Church on October 13, 1841. Burnside lost her hearing aged 13 as a result of scarlet fever. “During my girlhood days,” she once said “my greatest desire was to become a musician, but at thirteen years of age a terrible calamity befell me. I became totally deaf as the result of an attack of scarlet fever, and never regained my hearing. Then it was I took to verse writing as another way of making music, for it was the desire to write words for music which, in the first instance, induced me to try the art of rhyming.”

She was a talented artist and “before she was nineteen years of age the Royal Academy accepted one of her pictures of fruit and flowers, and, later, a couple of portraits in crayons” (The Strand).

She published many lyrics and poems, and it seems that over six thousand of her verses were put into Christmas cards over the years, as well as 150 of her songs being put to music. A song advertised in John Bull in 1871 and was set to music by Miss Maria Lindsay (later Mrs M. Worthington Bliss). Another lyric of hers, The Sprig of May, was put to music by Queen Victoria’s pianist, Jacques Blumenthal in 1883.

She worked as a designer for the Royal School of Art Needlework for nine years, “painting vellum bound books, having obtained a diploma in this branch of art from the World’s Columbian Exhibition.

Marion wrote many children’s books, and contributed many articles to The Girl’s Own Paper, including a story called “The Deaf Girl next door; or Marjory’s life work” which was in the March supplement in 1899. In The Girl’s Own Paper for 1897, she wrote an article about the deaf Fred Gilby, talking about The Royal Association in Aid of the Deaf and Dumb, mentioning Ephphatha their magazine, and its editor, MacDonald Cuttell. Writing to her audience of girls, she said, “What they require is to be encouraged to mix , on as equal terms as possible, with hearing persons, not to be set apart and left out in the cold, as if debarred by reason of their affliction from the interests, sympathies, amusements, and occupations of other girls.”

In 1878 she moved in to live with the novelist Rosa Nouchette Carey (1840–1909). She was certainly staying with her a 3 Eton Road, near Chalk Farm, in 1871. It seems probable that they were life long friends as Rosa was also born in Bromley-by-Bow in 1840. Carey left her an annuity when she died.

Helen Marion Burnside died at Updown Hill House, in Windlesham, Surrey, on the 5th of December, 1923.