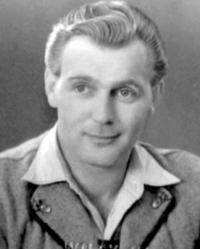 Josef Kohout (24 January 1915 – 15 March 1994) was an Austrian Nazi concentration camp survivor, imprisoned for his homosexuality. He is known best for the 1972 book Die Männer mit dem rosa Winkel (The Men With the Pink Triangle), which was written by his acquaintance Hans Neumann using the pen name Heinz Heger, which is often falsely attributed to Kohout.[1] The book is one of very few first-hand accounts of the treatment of homosexuals in Nazi imprisonment. It has been translated into several languages, and a second edition published in 1994.[2][3] It was the first testimony from a homosexual survivor of the concentration camps to be translated into English,[4] and is regarded as the best known.[3] Its publication helped to illuminate not just the suffering gay prisoners of the Nazi regime experienced, but the lack of recognition and compensation they received after the war's end.

Kohout's book inspired the 1979 play Bent, by Martin Sherman,[5] which was made into the movie Bent, directed by Sean Mathias, in 1997.

Kohout was born and grew up in Vienna. His mother and father[2] were wealthy Catholics, and his father had a high-ranking job in the civil service. Kohout was arrested in March 1939, at age 24, when a Christmas card he had sent to his male lover, Fred, was intercepted.[3][6] His lover Fred, whose father was a high-ranking Nazi official, was deemed "mentally disturbed" and escaped punishment.[3]

Kohout was interned in the Sachsenhausen concentration camp in January 1940 after having served a six-month sentence. In May 1940, Kohout was transferred from Sachsenhausen to Flossenbürg, in Bavaria, where he remained until his liberation in 1945.[1]

He reported that homosexual prisoners were the most reviled of all the camp's detainees, and prevented from mutual association.[3] Though the SS guards controlling the camp prevented the homosexual prisoners from associating with one another, sex between straight guards and gay prisoners nonetheless took place, with the guards construing such encounters as a "natural" expression of their "normal" sexuality in unusual circumstances.[3] Kohout was selected for sexual services by a Kapo, and then the senior of his block. Florence Tamagne, a contemporary author on the history of homosexuals in Europe, describes these involvements as fortunate for Kohout; the protection of these relatively privileged men may have helped Kohout to survive.[3]

Like other prisoners, Kohout was assigned futile tasks during his time in the camp, including using wheelbarrows to move the snow (and bare hands to move rocks) from one side of the compound to the other and back again.[5] The repetition and pointlessness of the tasks were such that many prisoners committed suicide.[5] Kohout observed the beating and the torture of prisoners,[8] and theorized in his writings that the sadism of some of the SS officers reflected repressed homosexual desires of their own.[3]

He was eventually reunited with his mother. His father had committed suicide in 1942,[3] leaving a note for his wife, Amalia, asking "May God protect our son".[11]