She was an early American aviation pioneer and a movie screenwriter. In 1911, she was awarded a U.S. pilot's certificate by the Aero Club of America, becoming the first woman to gain a pilot's license in the United States.[1] In 1912, she became the first woman to fly across the English Channel. Although Quimby lived only to the age of 37, she influenced the role of women in aviation.

She was born on May 11, 1875, in Arcadia Township, Manistee County, Michigan. After her family moved to San Francisco, California, in the early 1900s, she became a journalist. Harriet Quimby's public life began in 1902, when she began writing for the San Francisco Dramatic Review and also contributed to the Sunday editions of the San Francisco Chronicle and San Francisco Call. She moved to Manhattan, New York City in 1903 to work as a theater critic for Leslie's Illustrated Weekly and more than 250 of her articles were published over a nine-year period.[2] Quimby continued to write for Leslie's even when touring with airshows, recounting her adventures in a series of articles. Totally committed to her new passion, the dedicated journalist and aviator avidly promoted the economic potential of commercial aviation and touted flying as an ideal sport for women.[3] Quimby became interested in aviation in 1910, when she attended the Belmont Park International Aviation Tournament in Elmont, New York.[2] There she met John Moisant, a well-known aviator and operator of a flight school, and his sister Matilde.[4][5] On August 1, 1911, she took her pilot's test and became the first U.S. woman to earn an Aero Club of America aviator's certificate.[2] Matilde Moisant soon followed and became the second.[6] Due to the absence of any official birth certificate, many communities have claimed her over the years.[7]

After earning her license, the "Dresden China Aviatrix" or "China Doll," as the press called her because of her petite stature and fair skin, moved to capitalize on her new notoriety. Pilots could earn as much as $1,000 per performance, and prize money for a race could go as high as $10,000 or more. Quimby joined the Moisant International Aviators, an exhibition team, and made her professional debut, earning $1,500, in a night flight over Staten Island before a crowd of almost 20,000 spectators. As one of the country's few female pilots, she capitalized on her femininity by wearing trousers tucked into high lace boots accentuated by a plum-colored satin blouse, necklace, and antique bracelet. She drew crowds whenever she competed in cross-country meets and races. As part of the exhibition team, she showcased her talents around the United States and even went to Mexico City at the end of 1911 to participate in aviation activities held in honor of the inauguration of President Francisco Madero.[3] 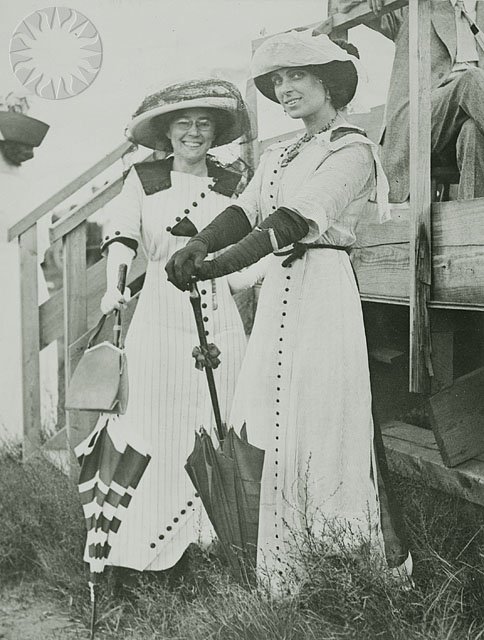 Harriet Quimby and Matilde Moisant, circa 1911–12

In 1911 Quimby authored seven screenplays or scenarios that were made into silent film shorts by Biograph Studios. All seven were directed by director D. W. Griffith. Stars in her films included Florence La Badie, Wilfred Lucas, and Blanche Sweet. Quimby had a small acting role in one movie.[8]

The Vin Fiz Company, a division of Armour Meat Packing Plant of Chicago, recruited Quimby as the spokesperson for the new grape soda, Vin Fiz, after the death of Calbraith Perry Rodgers in April 1912. Her distinctive purple aviator uniform and image graced many of the advertising pieces of the day.[9]

On April 16, 1912, Quimby took off from Dover, England, en route to Calais, France, and made the flight in 59 minutes, landing about 25 miles (40 km) from Calais on a beach in Équihen-Plage, Pas-de-Calais. She became the first woman to pilot an aircraft across the English Channel.[10] Her accomplishment received little media attention, however, as the sinking of the RMS Titanic the day before consumed the interest of the public and filled newspapers.[11]

On July 1, 1912, she flew in the Third Annual Boston Aviation Meet at Squantum, Massachusetts.[1] Although she had obtained her ACA certificate to be allowed to participate in ACA events, the Boston meet was an unsanctioned contest. Quimby flew out to Boston Light in Boston Harbor at about 3,000 feet, then returned and circled the airfield.[12] William A.P. Willard, the organizer of the event and father of the aviator Charles Willard, was a passenger in her brand-new two-seat Bleriot monoplane. At an altitude of 1,000 feet (300 m) the aircraft unexpectedly pitched forward for reasons still unknown. Both Willard and Quimby were ejected from their seats and fell to their deaths, while the plane "glided down and lodged itself in the mud".[5] Harriet Quimby was buried in the Woodlawn Cemetery in The Bronx, New York. The following year her remains were moved to the Kensico Cemetery in Valhalla, New York.[13] A cenotaph to Quimby, the Harriet Quimby Compass Rose Fountain, stands at Pierce Brothers/Valhalla Memorial Park Cemetery in Burbank, Los Angeles, California. Located close to the cemetery's Portal of the Folded Wings, a shrine containing the ashes of aviation pioneers, the Quimby fountain's plaque reads: "Harriet Quimby became the first licensed female pilot in America on August 1, 1911. On April 16, 1912, she was the first woman to fly a plane across the English Channel. She pointed the direction for future women pilots including her friend, Matilde Moisant, buried at the Portal of the Folded Wings."

In 1991 the United States Postal Service issued a 50 cent airmail postage stamp featuring Harriet Quimby.[15] She is memorialized in two official Michigan historical markers. One is located near Coldwater where she was born.[16] The other was erected near the now abandoned farmhouse in Arcadia Township where Quimby grew up.[17] In 2004 Quimby was inducted into the National Aviation Hall of Fame.[4] In 2012 Quimby was inducted into the Long Island Air and Space Hall of Fame.[18] The Old Rhinebeck Aerodrome possesses a flyable Anzani-powered one-seater Blériot XI, which bears the Blériot factory's serial number 56, showing that it was manufactured in 1909. Since Quimby's plane, in 1912, was a brand new two-seater, the idea that the former was the aircraft that she was flying in 1912 seems to be an urban legend.[19]