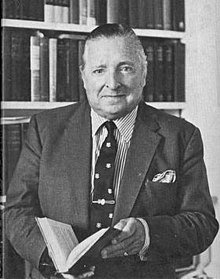 Harford Montgomery Hyde (14 August 1907 – 10 August 1989), born in Belfast, was a barrister, politician (Ulster Unionist MP for Belfast North), prolific author and biographer. He was deselected in 1959, losing his seat in the House of Commons, as a result of campaigning for homosexual law reform.

Born at 16 Malone Road in Belfast, Hyde was schooled in England at Sedbergh, Cumbria. His father, James Johnstone Hyde, was a linen merchant[1] and Unionist councillor for Cromac. Hyde took pride in his family connection to the Irish linen trade.[1] Although his mother came from a Protestant Home Rule background, all were involved in the 1914 UVF gun running, the 7-year-old Harford being a dummy casualty for first-aid practice. He attended Queen's University Belfast where he gained a first-class history degree, and then Magdalen College, Oxford, and a second-class law degree.[1] Hyde, when an MP, lived at Bertha House, 71 Malone Road, Belfast.

He married in 1939 to Dorothy Mabel Brayshaw Crofts (divorced 1952); in 1955 to Mary Eleanor Fischer (dissolved 1966) and finally to Rosalind Roberts Dimond. By his will, the residue of his estate was left to his widow Robbie and his papers to the Public Record Office of Northern Ireland. Hyde when an MP lived at Bertha House, 71 Malone Road, Belfast.

Beginning in 1947, Hyde spent two years as the legal advisor for the British Lion Film Corp. He served as a member of Parliament from the Belfast North Division in the House of Commons from 1950-59. He played a prominent role in the fight to abolish the death penalty for murder and became involved in efforts to bring about legal and social reform in the areas of censorship, pornography, and civil rights for homosexuals. Hyde also acted as a United Kingdom delegate for the Council of Europe Consultative Assembly in Strasbourg, France, from 1952-55. From 1959 to 1961 he was a professor of history and political science at Punjab University, Lahore, Pakistan.

The Rise of Castlereagh,Hyde's first published work, appeared in 1933. He published more than 40 books on various topics, including several volumes in the Notable Trial Series. As a scholar of trends in criminal law and social history, he focused particularly on pornography and scandal and wrote numerous works on Oscar Wilde, Alfred Douglas, Henry James, Roger Casement, and Judge Jefferys. Some of his titles include: Air Defense and the Civil Population (1937), Mexican Empire (1946), Privacy and the Press (1947), The Trial of Oscar Wilde (1948), The Trial of Craig and Bentley (1954), Trial of Sir Roger Casement (1960), Oscar Wilde: The Aftermath (1963), A History of Pornography (1964), Henry James at Home (1969), The Love that Dared Not Speak Its Name (1970), Oscar Wilde: A Biography (1975), Crime Has Its Heros (1976), The Annotated Oscar Wilde (1982), and Secret Intelligence Agent (1982), an autobiographical account of Hyde's activities during World War II. Hyde died in the summer of 1989, just after completing the introduction to his final work, The Lady Chatterley's Lover Trial, published in 1990.

He lived at Westwell House, Tenterden, in Kent, in a house once inhabited by Horatio Nelson's daughter. Hyde was earlier a tenant of Lamb House in Rye, once home to his distant cousin, Henry James. He worked up to his death on 10 August 1989, just short of his eighty-second birthday. His third wife Robbie survived him. Many of his papers are in the Public Record Office of Northern Ireland (PRONI). Others were sold to the University of Texas at Austin.