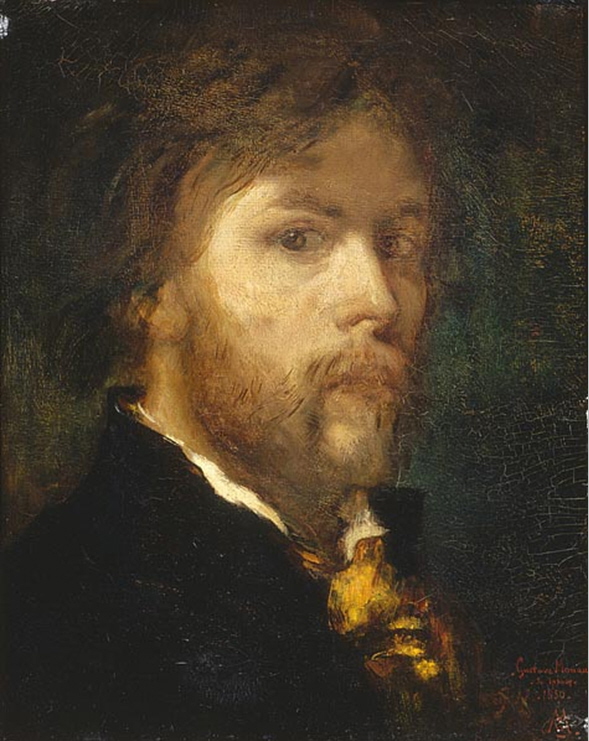 Gustave Moreau (6 April 1826 – 18 April 1898) was a major figure in French Symbolist painting whose main emphasis was the illustration of biblical and mythological figures. As a painter, Moreau appealed to the imaginations of some Symbolist writers and artists. He is recognized for his works that are influenced by the Italian Renaissance and exoticism. His art work was preserved in Paris at the Musée Gustave Moreau.

Moreau met Adelaide-Alexandrine Dureux (b. Guise, 8 November 1835) in 1859. The pair's relationship is not well-understood, partly because Moreau burned their correspondence upon Dureux's death. However, Moreau described her as his "best and only friend", and introduced her to drawing. Even though they were together for over 20 years, they never married, for unknown reasons; though some critics have suggested that Moreau might have been homosexual.

He was born in Paris, France, at 6 Rue des Saints-Peres. He came from a middle-class family. His father, Louis Jean Marie Moreau, was an architect for the city of Paris and his mother, née Adele Pauline Desmoutier, was an accomplished musician. Gustave Moreau lived a sheltered life growing up. Having visited Italy at age 15 he began his love for art. At age 18 he entered École des Beaux-Arts to study under the guidance of François-Édouard Picot and left in 1850.[1] He then began to study art under his new mentor Théodore Chassériau, whose work strongly influenced his own. Moreau participated in the Salon for the first time in 1852.

His first painting was a Pietà which is now located in the cathedral at Angoulême. He showed A Scene from the Song of Songs and The Death of Darius in the Salon of 1853. In 1853, he contributed Athenians with the Minotaur and Moses Putting Off his Sandals within Sight of the Promised Land to the Great Exhibition.[3]

Oedipus and the Sphinx, one of his first Symbolist paintings, was exhibited at the Salon of 1864. Moreau quickly gained a reputation for eccentricity. One commentator said Moreau's work was "like a pastiche of Mantegna created by a German student who relaxes from his painting by reading Schopenhauer."[4] The painting currently resides in the permanent collection at the New York Metropolitan Museum of Art.[5]

On 28 March 1890, Alexandrine Dureux died. Her death affected Moreau greatly, and his work after this point contained a more melancholic edge. She was buried at the same cemetery that Moreau himself would be laid to rest (see below).

Moreau died of stomach cancer and was buried at the Cimetière de Montmartre in Paris in his parent's tomb.