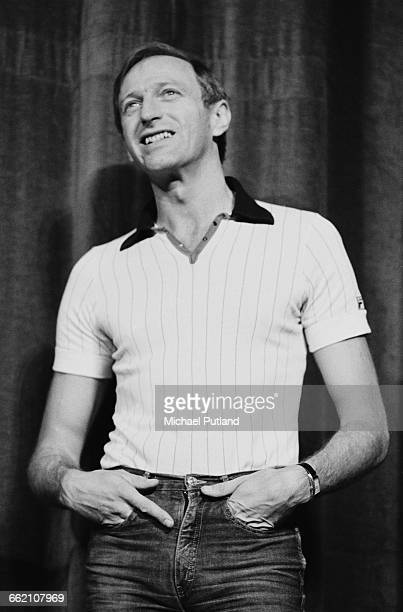 Graham Arthur Chapman (8 January 1941 – 4 October 1989) was an English comedian, writer, actor, author, and one of the six members of the British surreal comedy group Monty Python. He played authority figures such as the Colonel and the lead role in two Python films, Holy Grail (1975) and Life of Brian (1979).

Chapman was born in Leicester and was raised in Melton Mowbray. He enjoyed science, acting, and comedy, and after graduating from Emmanuel College, Cambridge, and St Bartholomew's Hospital Medical College, he turned down a career as a doctor to be a comedian. Chapman eventually established a writing partnership with John Cleese, which reached its critical peak with Monty Python in the 1970s. He subsequently left Britain for Los Angeles, where he attempted to be a success on American television, speaking on the college circuit and producing the pirate film Yellowbeard (1983), before returning to Britain in the early 1980s.

In his personal life, Chapman was openly homosexual and a strong supporter of gay rights, and was in a relationship with David Sherlock. He was an alcoholic during his time at Cambridge and the Python years, quitting shortly before working on Life of Brian. He later became an enthusiast and patron of the Dangerous Sports Club. Chapman died of tonsil cancer on 4 October 1989, on the eve of Monty Python's 20th anniversary, and his life and legacy were commemorated at a private memorial service at St Bartholomew's with the other five Pythons.

Chapman first met his long term partner David Sherlock in Ibiza in 1966.[51] He later described realising he was homosexual as "an important moment in my life".[52] He told close friends about his relationship, including Cleese and Feldman the following year.[53] Chapman and Sherlock moved to Belsize Park in 1968,[54] and the pair enjoyed visiting gay clubs in Central London.[55]

Chapman first disclosed his homosexuality in public on British jazz musician George Melly's television show in 1972, becoming one of the first celebrities to do so.[56][57] He was a vocal spokesman for gay rights, supporting the Gay Liberation Front.[58] In 1971, Chapman and Sherlock adopted John Tomiczek as their son. Chapman met Tomiczek when the adolescent was a run-away from Liverpool aged 14. After discussions with Tomiczek's father, it was agreed that Chapman would become Tomiczek's legal guardian.[59] Tomiczek later became Chapman's business manager and died of a heart attack in 1992.[60] In 1972, Chapman supported the newspaper Gay News, which listed him as one of the publication's "special friends" in recognition.[61]

Later, during his college tour, Chapman mentioned that a television audience member had written to the Pythons to complain about them having a gay member, adding that the Bible said any man who lies with a man should be taken out and stoned. With other Pythons already aware of his sexual orientation, Idle jokingly replied that they had found the perpetrator and killed him.[62] Both Sherlock and Tomiczek remained a constant in Chapman's life. In the mid-1980s, having resettled in Britain, the three moved to Maidstone, Kent.[63]

Chapman took up pipe smoking aged 15, which became a lifelong habit.[64] He began drinking heavily during his time at Cambridge and St Bartholomew's, favouring gin. By the time Monty Python went on tour in 1973, Chapman's drinking had begun to affect his performance, causing him to miss cues to go on stage.[65] He stopped drinking in Christmas 1977, concerned at being able to act in Life of Brian successfully, and remained sober for the rest of his life.[66]

In 1988, Chapman made a routine visit to a dentist, who found a small, but malignant tumour on one of his tonsils, leading to both being removed via a tonsillectomy.[67] The following year, the cancer had spread into Chapman's spinal cord, where another tumour was surgically removed. Chapman had several chemotherapy treatments and surgeries during the final months of his life, but ultimately the cancer was declared inoperable.[68] According to his brother, Chapman was visibly upset by the death of his mother that July, by which time he was terminally ill.[63] Shortly afterwards, Chapman filmed scenes for the 20th anniversary of the first broadcast of Flying Circus, the final time he appeared on television.[69][70]

Chapman died on 4 October 1989 in Maidstone Hospital.[71] At the time of his death, he was being visited by Sherlock, brother John and his sister-in-law, and fellow Pythons Palin and Cleese, the latter of whom had to be led out of the room to deal with his grief.[71][72] Peter Cook had intended to visit, but arrived too late and was visibly shaken by the news.[71] Chapman's death occurred on the eve of the twentieth anniversary of the first broadcast of Flying Circus, and Jones called it "the worst case of party-pooping in all history".[72]