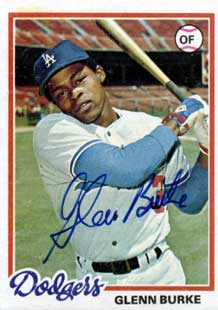 Burke was the first and only MLB player to come out as gay to teammates and team owners during his professional career and the first to publicly acknowledge it[1][2], stating, "They can't ever say now that a gay man can't play in the majors, because I'm a gay man and I made it."[3][4] He died from AIDS-related causes in 1995.[5][6]

Burke said "By 1978 I think everybody knew" and he was "sure his teammates didn't care." Former Dodgers team captain Davey Lopes said "No one cared about his lifestyle."[13] He told The New York Times that "Prejudice drove me out of baseball sooner than I should have. But I wasn't changing".[1] He wrote in his autobiography that "prejudice just won out."[3] Burke left professional sports at the age of 27. He told People magazine in 1994 that his "mission as a gay ballplayer was to break a stereotype" and that he thought "it worked".[14][15]

Burke continued his athletic endeavors after retiring from baseball. He won medals in the 100 and 200 meter sprints in the first Gay Games in 1982 and competed in the 1986 Gay Games in basketball. His jersey number at Berkeley High School was retired in his honor.[16] Burke played for many years in the SFGSL (San Francisco Gay Softball League), playing third base for Uncle Bert's Bombers.[17]

An article published in Inside Sports magazine in 1982 made Burke's homosexuality public knowledge. Although he remained active in amateur competitions, Burke turned to drugs to fill the void in his life when his career ended. An addiction to cocaine destroyed him both physically and financially. In 1987, his leg and foot were crushed when he was hit by a car in San Francisco. After the accident, his life went into physical and financial decline. He was arrested and jailed for drugs and lived on the streets of San Francisco for a number of years, often in the same neighborhood that once embraced him.[18] He spent his final months with his sister in Oakland. He died May 30, 1995, of AIDS complications at Fairmont Hospital in San Leandro, California, at age 42.[1] He was buried in Mountain View Cemetery in Oakland, California.

When news of his battle with AIDS became public knowledge in 1994, the Oakland Athletics organization helped to support him financially.[11] In interviews given while he was fighting AIDS, he expressed little in the way of grudges, and only one big regret – that he never had the opportunity to pursue a second professional sports career in basketball.

In 1999, Major League Baseball player Bill Bean revealed his homosexuality, only the second Major League player to do so. Unlike Burke, who came out to teammates while he was still an active player, Bean revealed himself four years after his retirement in 1995, the year Burke died.[19]

On August 2, 2013, Burke was among the first class of inductees into the National Gay and Lesbian Sports Hall of Fame.[20]