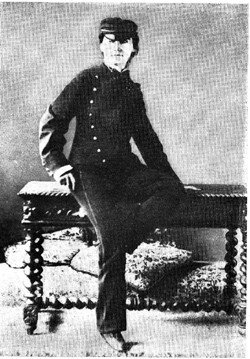 Gisèle d'Estoc, pen name of Marie-Paule Alice Curve, was a French writer and sculptor, feminist and anarchist, duelist and transvestite, born March 27, 1845, in Nancy and died on May 8, 1894, in Nice.

Gisèle d'Estoc studied sculpture and exhibited her works at the Salon [ 1 ] until 1899. She began a very strong friendly relationship with Marie-Edmée Pau (1845-1871), also an artist, in which the two young women develop their affinity for Jeanne d'Arc by exploring gender identities [ 2 ]. Gisèle d'Estoc (on the left) and her friend Marie-Edmée X.

At the end of the Second Empire, after a first marriage, she moved to Paris and began a literary career. Her main themes were social justice and feminism. She began a romantic relationship with Guy de Maupassant, then with Rachilde, a woman of letters, whom she later criticized in a pamphlet - under the name of Raclife - in La Vierge réclame. Her last companion was Pillager d'Arkaï [ 1 ].

She believed that women must be responsible for themselves, and warned journalist Séverine in 1890 for sending her husband to duel for her. She concluded her diatribe with equal capacities equal salary [ 1 ].

She joined under the name of G. d'Estoc the Ligue de l'affranchissement des femmes (League of the emancipation of the women) that Marie-Rose Astié de Valsayre had just created. The capital "G" made her first name epicene, while the name evoked her practice of fencing and cross-dressing. She joined the Fencing Group, also under the influence of Astié, who believed that a group of women taking the sword to defend their cause was necessary [ 1 ]. She was also a candidate for the 1893 legislative elections .

After her death, her story was told by Pierre Borel who painted an unflattering image of her, calling her a ghoul at the end of the century [ 1 ].

She later inspired Mélanie C. Hawthorne who wrote her biography. It also inspired Madeleine Pelletier who admired in her a path of light emancipation through the practice of fencing and cross-dressing [ 1 ].