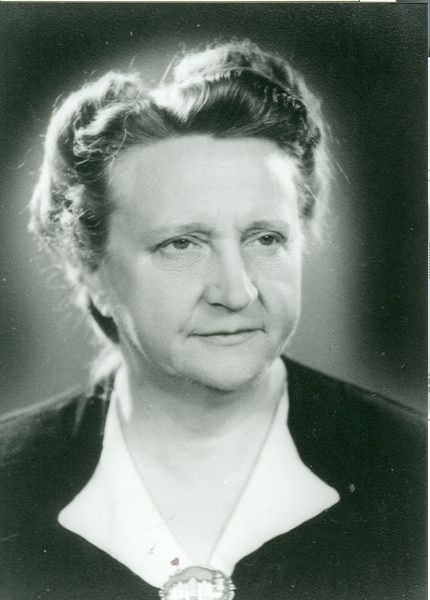 Gezina "Gesina" Hermina Johanna van der Molen ( Baflo , January 20, 1892 - Aerdenhout , October 9, 1978 ) was a Dutch lawyer and resistance fighter during World War II . Gesina and Maria Elisabeth "Mies" Nolte met in the late 1920s, started living together in 1930, and would continue to do so for the rest of their lives.

Van der Molen was the only child of the Frisian head teacher and later Member of Parliament and mayor Jan van der Molen and teacher Geertje Kuik. She attended the nursery school to follow in her father's footsteps, but her heart was not in education. The horrors of the First World War affected her so much that she decided to study nursing in Amsterdam . That turned out to be too heavy physically. The professor of law Anne Anema , a friend of the Van der Molen , motivated Gezina to move to journalism.

From 1920 the Van der Molen wrote for the Christian newspaper De Amsterdammer . At the same time, she was active in the women's and peace movement. From 1924 to 1929, she studied law at the Free University of Amsterdam , as the first girl student at that faculty . She was also the first woman to obtain a doctorate at VU , with Anema as a promotor . In the 1930s, Van der Molen was chairman of the Committee of Christian Women of the Nations Peace Action.

In World War II, Van der Molen took part in the resistance. Her pseudonym was Aunt Lien . From 1941 she was involved with Vrij Nederland . She also saved the lives of numerous Jewish children. She managed to smuggle them out of the Jewish nursery on the Plantage Middenlaan in Amsterdam. She carried out most of these activities together with her friend Maria Elisabeth "Mies" Nolte, a Roman Catholic teacher of German and art history, with whom she lived from 1930 until her death and whose influence she underwent to a significant degree. Both were forced to spend the last part of the occupation time at different hiding places.

In 1943 Van der Molen was one of the founders of the Christian resistance magazine (and later daily newspaper) Trouw , together with Sieuwert Bruins Slot , Jan Schouten and Wim Speelman . In 1942 she anonymously published the brochure Occupancy Law, intended to support the oppressed Dutch.

After the war, Van der Molen was chairman of the National Committee for War Nursing Children . This committee had to decide whether Jewish children would stay with their (often Christian) war foster families, or if they would be placed with Jewish family members. Tensions arose between Van der Molen and the Jewish members of the committee due to the different principles. [1] The break in 1946 was glued in 1947, but the crack remained visible. In 2013 and 2014, the interest group for the Jewish Post-war Generation ( JONAG ) and the Jewish War Children Association (JOK) protested at the municipality of Bloemendaal against the intention to name a street after Van der Molen. [2] [3]

In the last years of her life, she was weak and often ill. During this period she was cared for by her friend Mies Nolte. For all of their political engagement and activism, Gesina and Mies never publically talked about or acknowledged their relationship. Jan van der Molen, Gesina’s father, called Mies his ‘youngest daughter.’ Piet Meerburg, a fellow resistance worker, said he knew immediately that Gesina was lesbian, and old student and friend of Gesina’s, Pieter Kooijmans, described her relationship with Mies as ‘very intimate and warm.’

In 1943 Mies and Gesina even threw a special party to celebrate the fact they had been together for 12.5 years; one of the only times they publically acknowledged their relationship. After the war they would never bring attention to their relationship like this again. They kept to a strict code of conduct that included not showing physical affection. Aside from their celebration of 1943, they only broke this code when travelling abroad.

In 1949, Van der Molen was appointed professor by special appointment of international law at the Free University of Amsterdam . In 1952, she was a UN women's representative and delivered a speech to the United Nations General Assembly . From 1958 until her retirement in 1962, she was full professor of international law and international relations . She dealt with numerous issues: women 's rights , apartheid in South Africa , the United Nations , the South Moluccas and New Guinea . Pieter Kooijmans, the later foreign minister , was one of her students .