Gertrude Sandmann (16 November 1893 – 6 January 1981) was a German artist and Holocaust survivor.[1] She was a lesbian and, after the war, worked to improve the rights and visibility of LGBT people. Much of her oeuvre is held by the Potsdam Museum.[1] She was a co-founder of group L '74, which stands for "Lesbos 1974".

Born into a wealthy German-Jewish family, Sandmann studied at the Association of Berlin Artists and had private tutelage from Käthe Kollwitz. In 1935 she was banned from practicing her profession due to the Nuremberg Laws. Given a deportation order in 1942, she ignored it, faked her own suicide, and hid with friends in Berlin until the end of the war. She lived in an apartment in Berlin-Schöneberg until the end of her life.[2] 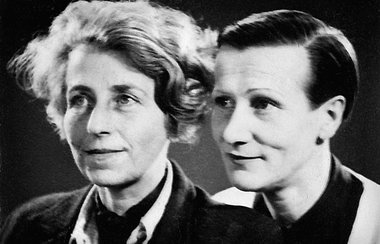 Sandmann belonged to the about 1,700 Jews who survived World War II hiding in Berlin. After a fictitious suicide, she went underground in 1942 helped by her Aryan girlfriend, Hedwig "Johnny" Koslowski; Hedwig arranged a hiding place with the Grossmann family, friends of hers living in the Treptow district of Berlin. They had been together since 1927. Later, as a “Verfolgte des Naziregimes” (a victim of the Nazists), she was given an apartment in the centre of Berlin. Here she lived together with her second partner Tamara Streck. Gertrude Sandmann worked as an artist until her death in 1981. She was an open lesbian and has done much for the recognition of homosexuality in Germany.